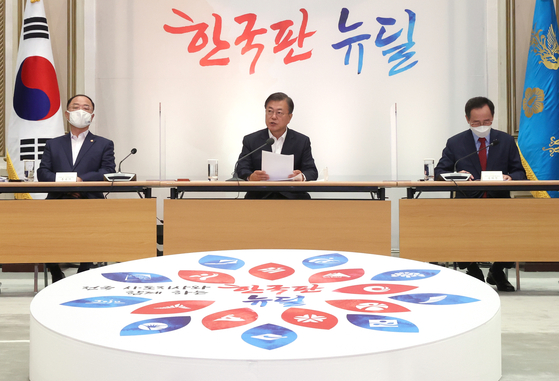 President Moon Jae-in speaks at a meeting with heads of local governments at the Blue House on Tuesday to discuss his Korean New Deal. [YONHAP]

President Moon Jae-in on Tuesday emphasized the government's focus on regional development as part of the 160 trillion won ($139 billion) economic plan his administration is calling the Korean New Deal.

During a meeting held with heads of 17 city and provincial governments at the Blue House, Moon said the government plans to add regional balanced development to the economic plan, including digital and green initiatives.

“The regionally balanced New Deal will add strength to the national development that the government has been working on until now,” Moon said. “It is a regional innovation strategy that will bring changes to regions [outside of the greater Seoul area] and bring in new vitality.”

The president said the goal is to shift the economic balance toward regions outside of the greater Seoul.

“It is the government’s strong will to start the dynamic changes of Korea from the [other] regions,” Moon said.

The president said the regional projects will bring changes to the daily lives of people living outside of Seoul by breathing life into the local economy, while creating jobs.

“In addition to overcoming the [Covid-19 pandemic] for the future of Korea, we cannot stop our steps in achieving nationally balanced development,” Moon said.

According to the government’s plan, nearly half of the 160 trillion won to be invested as part of the Moon administration’s Korean New Deal, 75.3 trillion won will be invested in projects that are conducted outside of greater Seoul.

The majority of the spending will be funded by the central government, which will cover 42.6 trillion won, or 57 percent, while local governments will match those funds with a total of 16.9 trillion won. The remainder will be in the form of private sector investments.

The government has not given specific details about the spending plan, but said it will provide other incentives to local governments that actively participate in the New Deal projects, such as larger subsidies from the central government.

However, some of the planned projects will be led not by the central government but by local governments, including the expansion of factory robotics in Daegu, the autonomous vehicle testing in Sejong as well as the development of a publicly backed delivery platform in Gyeonggi.

Some of the projects will be led by state-owned institutions, such as smart digital power plants run by the Korea Electric Power Corporation in Gwangju and Naju, South Jeolla, and upgrades to liquefied natural gas production by Korea Gas Corporation.

“For the regional, balanced New Deal to succeed, cooperation between the central government, local government and the private sector is a must,” Moon said. “And backup by the National Assembly is needed.”

Finance Minister Hong Nam-ki — during a separate press briefing held after the meeting at the Blue House — said the regionally balanced New Deal will be an opportunity to bring innovation to the regional economy and help secure new growth engines.