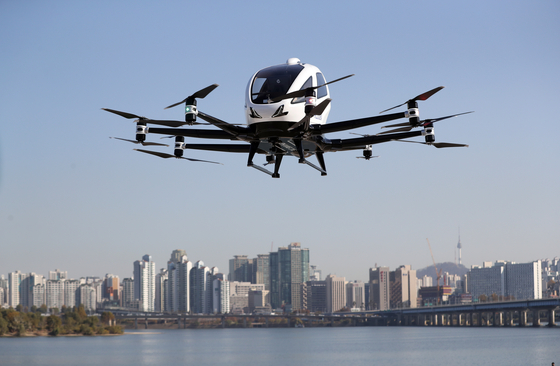 A passenger drone lands at Hangang Park in Yeouido, western Seoul, on Wednesday after finishing a test operation led by the Seoul City Government and Transport Ministry. [YONHAP]

The successful test marks the first step toward establishing the infrastructure needed to one day open Seoul's skies to airborne taxis and flying cars.

The two-seater drone traveled 3.6 kilometers (2.2 miles) in the air for about seven minutes along the Han River, carrying 80 kilograms (176 pounds) of rice in lieu of a real human.

“This is the first time that a passenger drone has been put to the test in Korea,” said an official from the Ministry of Land, Infrastructure and Transport's future mobility division.

“Still, since this is the first time, we used rice weighing almost the same as an adult male,” he said, adding that the ministry will keep working towards the test operation of a manned drone in the future.

The Transport Ministry has carried out research and development for drone-focused flight control systems since 2017, in line with its push to introduce airborne taxis by 2025.


The system is designed to ensure the safe operation of drones by keeping track of them and aligning their flightpath with predesignated routes.

The ministry and city government said that they will conduct more tests this month in other regions including Daegu, North Geyongsang and Jeju Island.

The government agencies will adopt the aerial vehicle for firefighting starting in 2023, while they will encourage universities to open a Master’s program on small aerial vehicles.

On the sidelines of the event, Hyundai Motor and Hanwha Systems showcased their prototypes for flying vehicles.

Asked why the Korean aircrafts weren't used for the trial, the Transport Ministry official said that they are all still at the development stage.

Hyundai Motor and Uber signed a partnership at this year’s CES show in Las Vegas to develop personal air vehicles that can be used as flying taxis, unveiling their own air taxi.

With a 49.2-foot wingspan and weighing in at 3,125 kilograms, the S-A1 has the body of a helicopter and eight propellers attached to its wings.

The flying vehicle will be commercialized by 2028, according to Hyundai's Chairman Euisun Chung during the event.

Hanwha Systems is working with Korea Airports Corporation (KAC) on the development of air taxis and related infrastructure.


The two will be developing the airframes for the flying vehicles as well as the avionics technology for the infrastructure, which will be built by KAC.