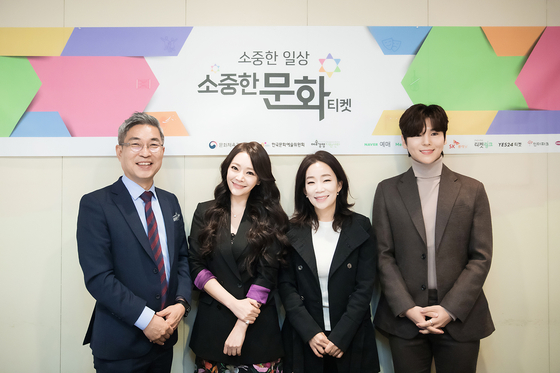 
Ticket sales in the performing arts industry increased by 26 percent last week compared to the weekly average for the previous month — the highest increase in three weeks — since the launch of performing arts discount coupons last month, the Korea Arts Management Service announced.

Under the title of "SOSO Culture Coupon,” the Ministry of Culture, Sports and Tourism and the Arts Management Support Center have been giving out 8,000 won ($7) discount coupons starting Oct. 22 to boost the sluggish demand for performing arts due to the Covid-19 pandemic.

According to the Korea Arts Management Service, SOSO Culture Coupons have accumulated 460,000 downloads as of Tuesday.

“We prepared the discount tickets to support the Korean performing arts industry ahead of the peak season at the end of the year,” Kim Do-il, CEO of the Korea Arts Management Service, said during the press event on Monday at the Conference House Dalgaebi in Jung District, central Seoul.

“Through this project, we aim to attract larger audiences and energize them through our performing arts."

With the number of daily new cases remaining at a steady rate and the social distancing lowered to Level 1, the performing arts industry has been making efforts since last week to return to its previous form by ending the practice of leaving empty seats between each audience member.

“There were times when everyone was confused and anxious that today might be the last day of the performance,” veteran musical actor Kim So-hyun said. “But I think the situation has gotten better because practices and performances have now stabilized and rules have been systematized. I hope the performing arts industry can overcome this Covid-19 crisis soon through this support campaign."

Among other performing arts sectors, gugak musician Kim Jun-su said gugak, or Korean traditional music, has been influenced the most by Covid-19, as it requires active participation of the audience members during the show.

The discount coupons can be applied to any performing arts ticket that runs within the valid period. Each audience member can download up to four coupons for each time period. The first batch of SOSO Culture Coupons that can be used until the end of this month can be downloaded until Nov. 25. The second batch, which will be available from Nov. 29 to Dec. 25, can be used for any performance that runs until the end of the year.