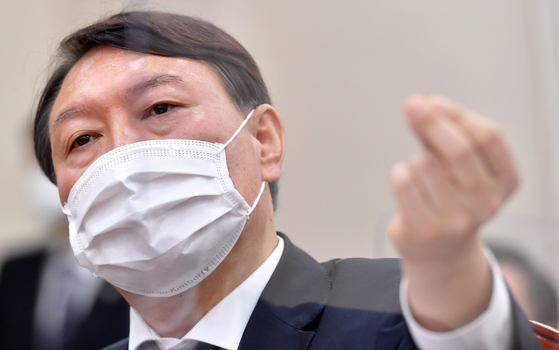 In this file photo, Prosecutor General Yoon Seok-youl speaks during a National Assembly audit of the prosecution on Oct. 22, 2020. [YONHAP]


Prosecutor General Yoon Seok-youl was on top of the latest poll asking who should be the next president.

According to a Hangil Research poll, 24.7 percent of respondents said they support Yoon as the next president. Chairman Lee Nak-yon of the ruling Democratic Party (DP) followed with 22.2 percent and Gyeonggi Gov. Lee Jae-myung, also a DP politician, came in third with 18.4 percent.

The poll was commissioned by KUKINEWS, an online media outlet affiliated with the Kukmin Ilbo. It surveyed 1,022 voters nationwide from Saturday through Monday.

Yoon's popularity has skyrocketed after he left open the possibility of entering politics after his tenure ends next year. He made that comment at the end of a National Assembly audit session of the prosecution on Oct. 23, 2020.

Yoon's interest in joining politics follows an intense power struggle with Justice Minister Choo Mi-ae and the ruling party.
During his confirmation hearing in July 2019, Yoon said, "I have no talent for politics, and I have no intention to start a political career." Last month, however, he said, "I will take time and think about how I can serve society and the people."

Yoon's tenure ends in July 2021 and the next presidential election takes place in May 2022.

Yoon's profile rose when he revealed during a parliamentary audit in 2013 that his probe into illegal meddling by the National Intelligence Service in the 2012 presidential election to help Park Geun-hye win was interfered with by his superiors. For the next several years, Yoon faced a series of demotions.

He returned to the spotlight in December 2016, when he was asked to join an independent counsel team that investigated Park. In 2017, President Moon Jae-in handpicked Yoon to head the Seoul Central District Prosecutors' Office. Two years later, Moon promoted Yoon to prosecutor general.

Since Justice Minister Choo took office in January, she carried out a series of measures to weaken Yoon's powers. Last week, Choo ordered an internal probe into an allegation that Yoon has been misusing the prosecution's special activities budget to finance his political ambitions.

Yoon's popularity has only grown as his battle with Choo and DP lawmakers intensifies. "The more they make groundless attacks on Yoon, the stronger the reason will be for him to join politics," said a senior prosecutor.

Other members of the prosecution said they were uncomfortable with polls including Yoon as a potential presidential candidate. "Now, his image as a politician is fixed," said another senior prosecutor. "We are seeing a battle between two politicians — Choo and Yoon."

Choo on Wednesday pressured Yoon to step down. "In the poll announced today, he was ranked highest as a presidential candidate," Choo said. "Political neutrality is crucial for a prosecutor. This is a serious matter. I think he should just resign and become a politician."

The district office, led by Choo's ally Lee Sung-yoon, has been investigating an allegation that Yoon and his wife, Kim Kun-hui, took bribes. Kim, who married Yoon in 2012, has denied the allegation.

In September, a liberal civic group filed a criminal complaint against the couple. Kim's company, Covana Contents, hosted an exhibition in June 2019 and four big companies originally agreed to sponsor the event. As Yoon was nominated as prosecutor general in the next month, 12 more companies sponsored the event.

The civic group said the sponsorships were bribes and that Yoon and Kim must be investigated. The Seoul Central District Prosecutors' Office launched a probe.

On Monday, prosecutors applied for warrants to raid Kim's company and businesses that sponsored the event, but the Seoul Central District Court rejected the request. The court said there was a possibility that Kim and the sponsors will submit the records voluntarily, indicating that the investigation team made no prior effort to seek their cooperation.

"The investigation team never contacted us," an aide to Kim told the JoongAng Ilbo.