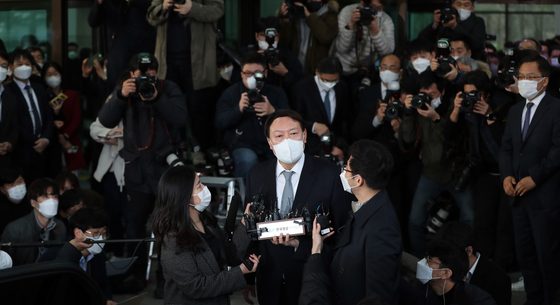 Yoon Seok-youl talks to reporters on Thursday as he leaves the Supreme Prosecutors' Office after stepping down as the prosecutor general. [KIM GYEONG-ROK]


After a resignation considered a slap in the face to the Moon Jae-in administration, former Prosecutor General Yoon Seok-youl soared in poll predicting next year's presidential race, overtaking top politicians from the ruling party.

In a poll by the Korea Society Opinion Institute (KSOI) conducted on Friday, Yoon’s rating soared to 32.4 percent, up from 14.6 percent in KSOI's previous survey on Jan. 22.

Respondents were asked whom they think is the best person to be the next president.

Yoon stepped down Thursday in protest of the Moon administration’s campaign to neuter the state prosecution service. "Constitutional values and the rule of law, which have elevated this country, are being destroyed. And the people will suffer as a consequence,” he said at the time. 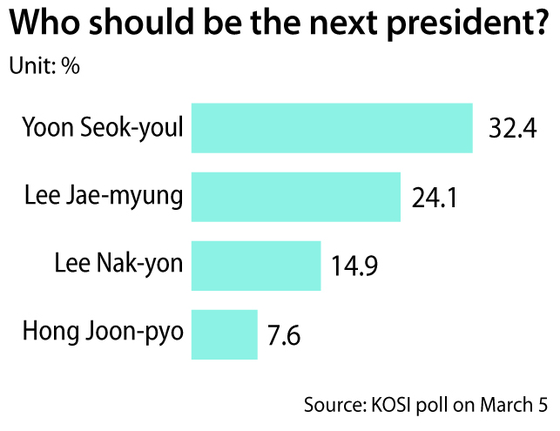 The poll had a 95-percent confidence level and plus or minus 3.1 percentage-point margin of error.

In another poll conducted by Realmeter on Saturday and Sunday, Yoon  topped the presidential list with 28.3 percent. Gyeonggi Governor Lee was second with 22.4 percent. DP Chairman Lee third with 13.8 percent and Rep. Hong fourth with 5.7 percent.

And yet the public seemed to be split on the issue of whether Yoon should go into politics or not. According to a different Realmeter poll conducted on Friday, 48 percent of respondents said it was appropriate for Yoon to become a politician, while 46.3 percent said it was inappropriate for him to do so.

As Yoon’s support rate soared, Acting Chairman of the PPP Kim Chong-in said Yoon seems to have seized the “Sternstunde” or the moment of glory.

Kim, a veteran election strategist, said Yoon isn’t likely to launch his political career before April 7 mayoral by-elections in Seoul and Busan. He said he would meet Yoon when there is an opportunity in the future, but not immediately.

Yoon’s first public message after his resignation was a criticism of how the Moon administration is handling a snowballing scandal over employees of Korea Land and Housing Corp. (LH) and other government officials making real estate investments using inside information. The Blue House and administration have said the government will conduct an internal investigation first and then hand the case over to the police. Yoon said the prosecution should investigate it.

“Using inside information for real estate speculation is a serious crime,” Yoon told the JoongAng Ilbo on Sunday. “Land and money transactions must be scrutinized to lay bare the truth.”

Yoon said a Prime Minister’s Office’s probe can be a stalling tactic before the April 7 by-elections. “Responsible politicians, whether you are members of the ruling party or opposition, must demand a massive investigation,” he said.

“When you waste time before a government probe, there is a great risk of evidence destruction,” he said. “The investigation must be fast and massive.”

He said that as a prosecutor, he had experience in investigating a similar case and indicting 138 public servants in 2005, hinting that it is imperative to let the prosecution investigate the case.

Meanwhile, Moon’s approval rating dropped slightly to 40.1 percent in the latest survey by the Realmeter. According to the poll, conducted from March 2 to 5, Moon's rating dropped by 1.7 percentage points from the previous week.

His disapproval rating was 55.7 percent, up by 2.1 percentage points from the previous week.

More information about the polls is available on the homepage of the National Election Survey Deliberation Commission.