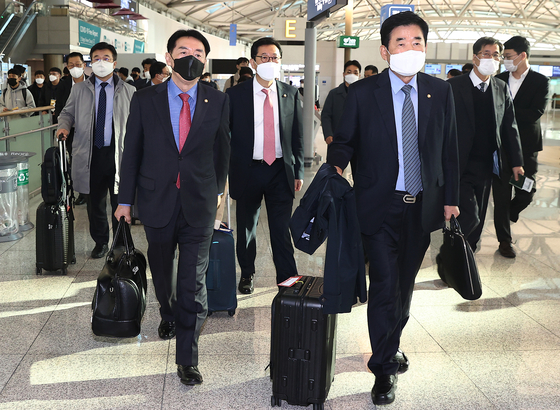 
A bipartisan group of Korean lawmakers kicked off a visit to Japan Thursday to improve relations strained by trade and historical issues and encourage a leaders’ summit.

Kim told reporters at Narita International Airport Thursday, “It is time for the leaders of the countries to meet to discuss the pending issues between Korea and Japan and make a political decision.”

The delegation held a meeting with their Japanese counterparts from the Japan-South Korea Parliamentarians' Union, led by Fukushiro Nukaga of the ruling Liberal Democratic Party (LDP), Thursday to discuss how to resolve issues including compensation of wartime forced labor and export restrictions.

Kim did not elaborate on the forced labor issue, saying it would be “discourteous.”

The parliamentary groups also formed a committee supporting exchanges and cooperation for the Tokyo Olympic and Paralympic Games, which were postponed to next July because of the coronavirus pandemic.

The parliamentarians’ unions plan to hold a joint seminar in January next year and discuss ways to encourage bilateral exchanges ahead of the Tokyo Olympics.

The delegation was expected to meet with Prime Minister Suga Friday, which would mark the Japanese leader’s first meeting with Korean lawmakers since he took office in September. It could serve as an opportunity to discuss a wide range of issues and how to promote exchanges between the two countries.

This trip comes on the heels of a visit by Park Jie-won, director of the National Intelligence Service (NIS), who concluded a four-day trip to Tokyo Wednesday which included a meeting with Suga at his residence Tuesday and a meeting with LDP Secretary General Toshihiro Nikai.

The lawmakers were also expected to meet with Natsuo Yamaguchi, leader of the LDP’s junior coalition partner Komeito, and Yukio Edano, head of the largest opposition Constitutional Democratic Party.

During Park’s meeting with Suga, the NIS chief proposed a joint leaders’ statement in the spirit of a similar declaration between Korean President Kim Dae-jung and Japanese Prime Minister Keizo Obuchi signed on Oct. 8, 1998. In the Kim-Obuchi declaration, “A New Japan-Republic of Korea Partnership towards the 21st Century,” Obuchi expressed his “deep remorse and heartfelt apology” for Japan’s colonial rule over Korea.

Japan’s Asahi Shimbun reported Thursday that a visit to Tokyo by Suh Hoon, the director of the Blue House National Security Office, was being coordinated for next week, citing a Japanese government official. It added that Suh could propose ideas on how to resolve the forced labor issue.

However, Kang Min-seok, the Blue House spokesman, in a briefing Thursday dismissed the report and said, “It’s not true.”