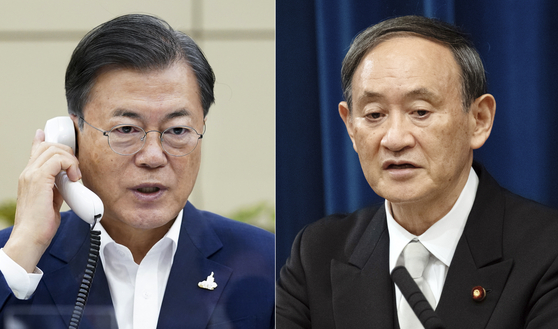 
In his first phone conversation with new Japanese Prime Minister Yoshihide Suga, President Moon Jae-in said the two countries should work together to find a resolution to the issue of Korean workers forced into labor during World War II, the Blue House said Thursday.

“President Moon said the two countries should step up efforts based on a new attitude to resolve pending bilateral issues, including the forced labor issue,” Kang said. “Prime Minister Suga said he will encourage efforts to resolve the issues through talks.

“Moon, in particular, said the two countries have differences in their stances on the forced labor issue, but he hopes to find the best resolution that will satisfy both governments and all parties involved,” Kang said.

The Korean Supreme Court made a landmark ruling on Oct. 30, 2018, ordering Nippon Steel & Sumitomo Metal, renamed Nippon Steel last year, to pay 100 million won ($82,000) each to Korean victims of Japanese forced labor during World War II. It made a similar ruling on Nov. 29, 2018, against Mitsubishi Heavy Industries. The top court acknowledged the illegality of Japan’s 1910-45 colonial rule and recognized that individual’s rights to compensation had not expired.

The Japanese companies have refused to comply, and plaintiffs began the process of seizing their assets in Korea. Tokyo maintains that all compensation issues related to colonial rule were resolved through a 1965 Korea-Japan claims settlement agreement.

Following their phone conversation, Suga briefed reporters about the call. “I told President Moon that we must not leave bilateral relations in the current serious state, such as the feud over the forced labor issue,” Suga was quoted as saying by Japanese media.

Suga told reporters he will continue to “strongly urge Korea to take appropriate action” based on Japan’s consistent position on how to settle the forced labor issue.

It was the first time the leaders of the two countries have spoken since a meeting between Moon and Suga’s predecessor, Shinzo Abe, in China in December 2019. Since taking over from Abe, who stepped down due to health problems, Suga had phone conversations with several world leaders including U.S. President Donald Trump. He is scheduled to speak with Chinese President Xi Jinping on Friday.

During their conversation, Moon and Suga agreed to work together to counter the Covid-19 crisis. Moon said he hoped the pandemic will stabilize so that the Tokyo Olympic Games can take place next year, Kang said.

According to Kang, Moon and Suga welcomed an upcoming arrangement between the two countries to ease entry restrictions on essential travelers such as businessmen. “They expressed anticipation that the special entry measures will serve as an opportunity to resume people-to-people exchanges between the countries and improve bilateral relations,” Kang said.

The two leaders also agreed to cooperate on Moon’s Korean Peninsula Peace Process concerning the denuclearization of North Korea, according to Kang. Suga also asked for Korea’s continuing support to resolve the issue of North Korea’s abductions of Japanese citizens, and Moon agreed to do so, Kang said.

According to a presidential aide, the phone call was arranged at the request of Moon.

During the talks, no discussion took place about Moon’s recent proposal that the two Koreas, Japan, China and Mongolia form a regional public health organization, although they did address cooperation on the coronavirus pandemic. Moon made the proposal in a videotaped United Nations General Assembly speech Tuesday.