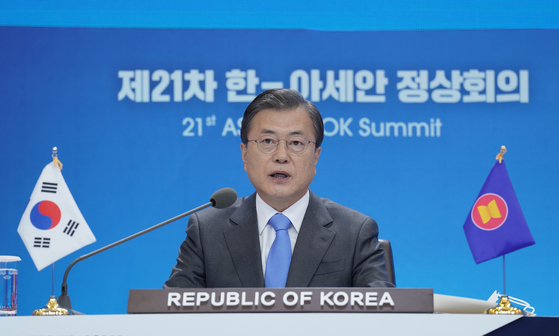 President Moon Jae-in on Thursday speaks at the virtual summit between Korea and the Association of Southeast Asian Nations. [YONHAP]


President Moon Jae-in on Thursday stressed increased cross-border cooperation to combat the Covid-19 pandemic during a virtual summit with leaders from the Association of Southeast Asian Nations (Asean).

According to the Blue House, Moon started his four-day Asean-related meetings by attending the bilateral summit in the evening. It was the 21st such summit between Korea and the 10 Asean member countries.

During the summit, Moon noted that the strategic partnership between Korea and the Asean marked the 10th anniversary this year, before presenting what he termed his “New Southern Policy Plus” strategy, an expansion of his policy toward the Asean announced three years ago.

"Based on the belief that Korea's New Southern Policy's vision and accomplishments have helped both the Asean and Korea, I prepared the New Southern Policy Plus strategy," Moon said. "Each country suffers different levels of damage from the Covid-19 pandemic, and no country can feel safe until a vaccine and treatment are developed and offered to all countries. But when the Asean and Korea cooperate, we can preemptively counter the Covid-19 crisis and social and economic changes caused by the pandemic."

Moon said his expanded strategy focuses on seven key areas, including more comprehensive public health and medical cooperation. Humanitarian cooperation in the public health field must be expanded, and Korea and the Asean should continue high-level dialogue focused on countering the pandemic, Moon said. He also proposed that Korea and the association work together to jointly educate medical professionals.

Moon noted that it is timely for Korea and the Asean to be holding the summit as the international community needs close cooperation to counter the Covid-19 pandemic.

He took note that Korea has agreed to fast-track entry programs with some Asean countries to maintain essential travel and expressed hope that the system would expand further.

Moon also said Korea has promised to participate in Asean-led initiatives such as the Covid-19 Asean Response Fund. Korea pledged to contribute $1 million to the fund, launched in June.

Moon noted that Korea is participating in the global initiatives to develop vaccines and work to arrange fair distribution of vaccines and cures to all members of the Asean countries through international organizations such as the International Vaccine Institute (IVI), which is located in Korea.

He also emphasized Korea’s support for the Asean Comprehensive Recovery Framework and said his new strategy and the framework will together bring about economic prosperity for the region and Korea.

As a part of his New Southern Policy Plus, Moon also promised to share Korea’s education and human resources development models and create mutually beneficial and sustainable foundations for trade and investment. The policy also proposes working with the Asean countries to develop infrastructure in both rural and urban areas.

Moon also requested Asean leaders’ support for his policy on North Korea, to which they reaffirmed their commitment.

According to the Blue House, Moon has paid special attention to expanding Korea’s diplomatic ties beyond the four traditional superpowers — China, Japan, Russia and the United States. Since he took office, Moon visited all 10 Asean countries and hosted the special summit in Busan last year.