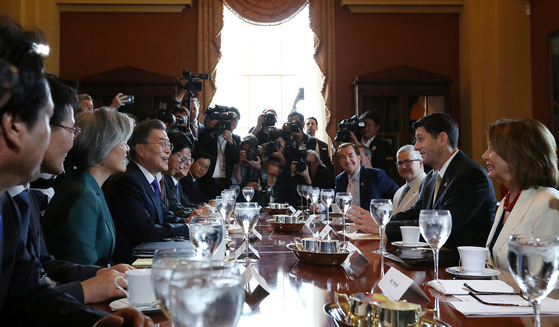 In this file photo, President Moon Jae-in, fourth from left, talks with leaders of the U.S. House of Representatives in Washington, D.C. on June 26, 2017. [YONHAP]

Moon sent congratulatory messages to 12 politicians and expressed his appreciation for their support of the Korea-U.S. alliance, the Blue House said.

Others who received the messages included Senator Dan Sullivan (R), who has been chairing the Congressional Study Group on Korea.

Moon’s messages to congressional figures followed his first phone talk with President-elect Joe Biden on Thursday. During their conversation, Biden called Korea a “linchpin” for the security and prosperity of the Indo-Pacific region.

Moon’s ruling Democratic Party (DP) is also planning to send a delegation to the United States.

“A delegation, led by Rep. Song Young-gil, who chairs the Foreign and Unification Affairs Committee of the National Assembly, will depart for the United States on Sunday,” said DP Chairman Lee Nak-yon on Friday. “We hope to build a network and explore the leaders’ policies.”