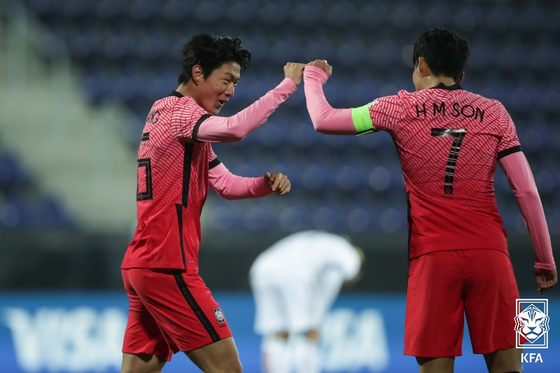 Hwang Ui-jo, left, and captain Son Heung-min celebrate after scoring the opener during the match against Mexico at Stadion Wiener Neustadt in Austria on Saturday. [KFA]


With a total of six players testing positive for the coronavirus ahead of the match, the Korean national football team struggled through its first friendly of the year against Mexico at Stadion Wiener Neustadt in Austria on Saturday.

Led by head coach Paulo Bento, the Korean national team was on high alert the day before the match as four players and a staff member tested positive for Covid-19. With the fate of the fixture still undecided on Saturday morning, all Korea players that had tested negative earlier in the week were tested again.

With six players now testing positive — Na, Kim, Lee Dong-joon of Busan I'Park, Kwong Chang-hoon of SC Freiburg, Hwang In-beom of Rubin Kazan and goalkeeper Jo Hyeon-woo of Ulsan Hyundai FC — the decision was made just a few hours before kickoff that the match would go ahead as planned.

Not only did Bento have to restructure the team with some key starting players missing, but the Taeguk Warriors had to play the match with six less names on the roster.

Despite the problems off the pitch, Korea got off to a strong start when kickoff finally came around. Bento's two main strikers — captain Son Heung-min of Tottenham Hotspur and Hwang Ui-jo of Bordeaux FC — were both on the pitch and on form, with Hwang scoring the opener in the 20th minute of the match.

As the 11th-ranked Mexico struggled to find the back of the net in the first half of the match, it seemed like the 38th-ranked Taeguk Warriors had a serious shot at causing an upset, despite the tough situation off the pitch.

However, that wasn’t to be.

In the end, Korea played a solid 87 minutes of football. It was the other three minutes that let them down.

It started in the 67th minute, when Raul Jiminez scored an equalizer to take the score to 1-1. Then, just two minutes later, Uriel Antuna scored another to allow Mexico to take the lead for the first time in the match. But Mexico wasn’t done.

One minute after that, in the 70th minute, Mexico extended their lead once again as Carlos Salcedo scored the team’s third goal of the match.

With Mexico taking a sudden 3-1 lead, Kwon Kyung-won, who currently plays for the military team Sangju Sangmu as a form of military service, added Korea’s second goal of the match in the 87th minute but the damage was done and the Taeguk Warriors walked away with a 3-2 loss in its first friendly match of the year.

Even before the positive Covid-19 tests, the friendly got off to a strange start. Due to the coronavirus pandemic, the two teams had agreed to play their friendly in Austria, which allowed Bento to call up players who play in European leagues like Son, Hwang Ui-jo and Hwang Hee-chan of RB Liepzig. This was Korea's first overseas fixture since November last year and the team's first time playing together since the EAFF E-1 Championship in December.

The Austrian location meant that the majority of both teams had to travel to Europe especially for the fixture, allowing Europe-based players to join the squad, but potentially increasing the coronavirus risk for the rest of the team. This was immediately evident on Friday, when four Korean players and a staff member tested positive for the virus.

Bento was hoping to pick up Korea’s 500th international match victory against Mexico, but the absence of his starting members — perhaps most obviously goalkeeper Jo Hyeon-woo — proved crucial.


However, before their players head back to their respective clubs, they’ll have one more shot at that 500th win. The Taeguk Warriors face Qatar at 2 p.m. on Tuesday, or 10 p.m. in Korea.

Before the senior team's first friendly against Mexico, Korea's U-23 team also played their second friendly match against Brazil and suffered a 3-1 loss at Al Salam Stadium in Cairo on Saturday.

This is the U-23 team's second friendly match in Egypt as they played to a scoreless draw against Egypt on Thursday.

"These matches were significant in the sense that I had a chance to see many different players, and the results weren't really that important," U-23 squad's Kim Hak-bu was quoted as saying on Yonhap. "I don't think I can single out any player that stood out, but I was able to get a general picture."

These friendly matches were especially important for the young Taeguk Warriors as they'll affect Kim's roster for the Tokyo Olympics, which has been postponed to 2021 for the first time in the Olympics history.