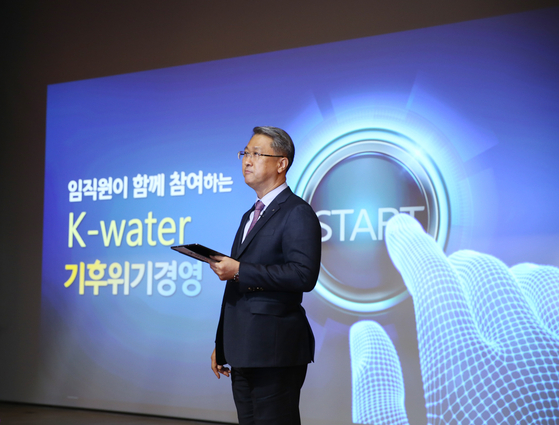 Park Jae-hyeon, CEO of K-water, presents the company’s plans to combat the climate crisis during the company's 53rd anniversary ceremony held in Daejeon on Monday. [K-WATER]

During a 53rd anniversary ceremony, K-water said it will be the first public company to join the Renewable Energy (RE) 100 global initiative to realize 100 percent renewable energy sources by 2050.

Under the plan, it will push for technological innovation to lead the competitive global water market, as well as strengthen water management systems to improve the quality of water and public safety.

It also said it will try to participate in corporate social responsibility activities such as reducing water prices and creating more job opportunities.

“Celebrating our 53rd anniversary, it’s time to act toward fighting the climate crisis,” said Park Jae-hyeon, CEO of K-water. “As a public company specializing in water, K-water will actively contribute to the country’s plan to go green by thoroughly pushing our plans [against the climate change] based on close cooperation with central government, local governments and civil society.”