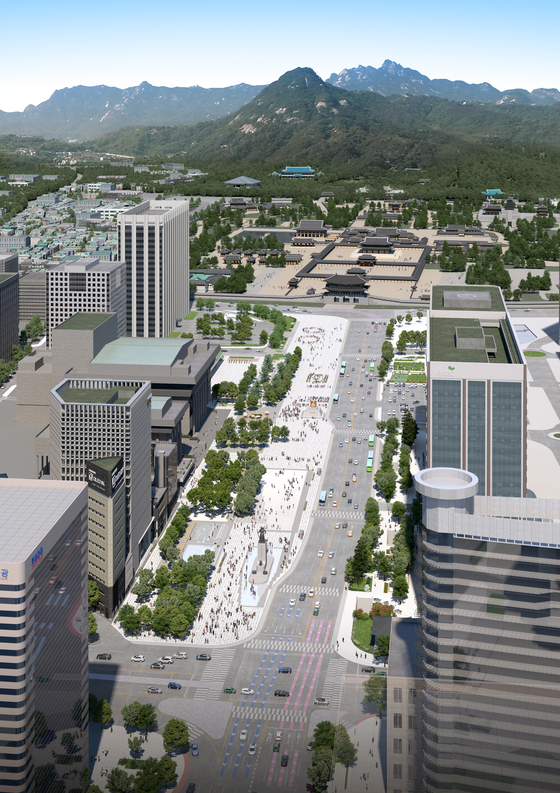 An artist's rendition of Gwanghwamun Square in central Seoul after renovations with a larger plaza and fewer lanes of traffic. [YONHAP]

Acting Seoul Mayor Seo Jung-hyup said in an online press briefing at City Hall that the Seoul Metropolitan Government was finally kicking off the project after years of planning and discussing with the public, saying his office was determined to swap the “greyness” of Gwanghwamun Square in downtown Seoul with a “green and ecological” space.

The Gwanghwamun project was a core pillar of the late Seoul Mayor Park Won-soon’s green initiative to redesign the central Seoul area so that people can move about more easily on foot rather than relying on cars and polluting the environment.

The city will essentially work toward converting all six lanes west of Gwanghwamun Square into a large park.

On the east side of the square in front of the U.S. Embassy, where there are currently six lanes, the city will add one to three more lanes.

When the project is finished, three to five lanes around Gwanghwamun Square will be gone for good.

The city government said Monday that construction will begin on the square’s east side and hopefully finish by February.

Work to convert the six lanes west of the square into a park is scheduled to launch in May 2021 and wrap up five months later. Some 100 types of trees will be planted, the city said.

To minimize inconvenience to drivers during the construction period, the city government said it formed a so-called Gwanghwamun Square Traffic Management Taskforce with the Seoul Metropolitan Police Agency to discuss ways to reroute cars around the area.

While the city government stressed Monday that it had canvassed public opinion over 300 sessions since 2016, some urban development activists accused the city of ignoring their opinions and trying to push through reconstruction as quickly as possible to add to their list of administrative achievements before a new mayor gets elected next April.

The Seoul city government denied these accusations, saying “some” angry voices from civic groups don’t represent the entire society, and that carrying out the project, in fact, was a way for the city to “keep its promise with citizens.”

That time of year