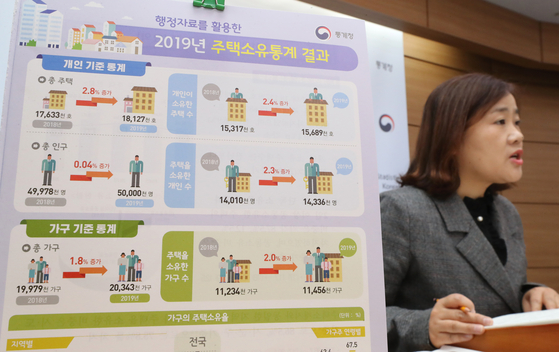 
The number of people owning multiple homes has increased despite the government tightening its grip on the real estate market, including making it harder for people to borrow money for buying apartments or increasing the tax burden, casting doubt on the Moon Jae-in government’s real estate policies.

The report by Statistics Korea comes on the heels of the government planning to announce another real estate measure, which would be its 24th under the current administration, as apartment prices and even the jeonse long-term rent prices have been rising.

According to the statistics agency on Tuesday, last year the number of people that owned a residential property totaled 14.3 million, which is a 2.3 percent increase compared to a year ago. This is a record high since related statistics were first compiled in 2012.

The total number of apartments that are privately owned totaled 15.7 million, a 2.4 percent increase year-on-year. And these private properties accounted for nearly 87 percent of the total 18.1 million.

Among the 15.7 million privately owned residential properties, 60 percent, or 9.38 million, were apartments, which is a 3.8 percent year-on-year increase.

The total number of apartments was 11.3 million, a 4.3 percent increase year-on-year.

While 84.1 percent, or 12 million, residential real estate owners only owned one apartment, 15.9 percent, or 2.28 million, owned two or more.

The ratio of people that owned two or more residential properties has been increasing over the years. In 2012, when the statistics agency started tabulating the number, it was 13.6 percent, and in 2017, when the current administration kicked off, it rose to 15.5 percent.

Jeju topped the lists when it comes to people who own more than two apartments, at 20.7 percent, followed by Sejong, at 20.4 percent, and South Chungcheong, at 19 percent.

But one of the noticeable changes was while the ratio of multiple-home owners in Seoul was the same as in the previous year, in Gyeonggi, the number increased from 15.3 percent in 2018 to 15.7 percent last year.

This was largely due to homebuyers shifting to Gyeonggi as the government last year targeted its real estate in Seoul.

By small districts, Gangnam topped the list, with 21.5 percent, followed by Seogwipo in Jeju, at 21.2 percent.

The study has also found that the gap between the rich and poor, when it comes to the number of apartments owned and their average value, has widened.

For residential properties owned by the bottom 10 percent, the average book value was 27 million won. The average ownership was 0.97 units.

The book value of residential real estate owned by the top 10 percent exceeded the national average at 275 million. The average number of apartments that are owned is 1.37 units.

The study has shown that particularly those in their 30s and 40s were aggressive in buying apartments.

“The ratio of multiple residential real estate owners has increased sharply compared to the past,” said Kim Jin, director of the administrative data management division at the statistics agency. “However, since 2017 that growth has somewhat been easing.”

The statistics agency director added that it is difficult to evaluate the impact of the government’s policies just by the statistics.

Prepping homemakers take us to brink of 'delivery chaos'