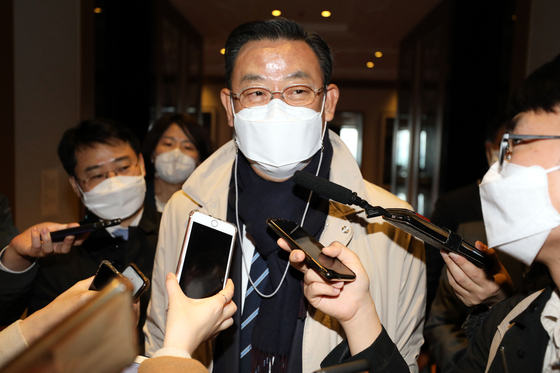 Kim Tae-young, chairman of the Korea Federation of Banks, receives questions from reporters after holding a meeting where he confirmed the long list of the federation's candidates for next chairman with the board at a hotel in Seoul on Tuesday. [NEWS1]


The Korea Federation of Banks released a list of seven candidates for its chairmanship Tuesday.

“It could be finalized at the board meeting scheduled for next Monday,” Chairman Kim Tae-young told reporters on Tuesday morning after the meeting, “and if not it could take a couple of more days."

When asked about rumors that his term could be extended, Kim said, “I am not included on the long list," adding that he wants to bring his term to a successful conclusion.

After the board selects a final candidate, the selection will be put to a vote by the 22 member banks of the federation.