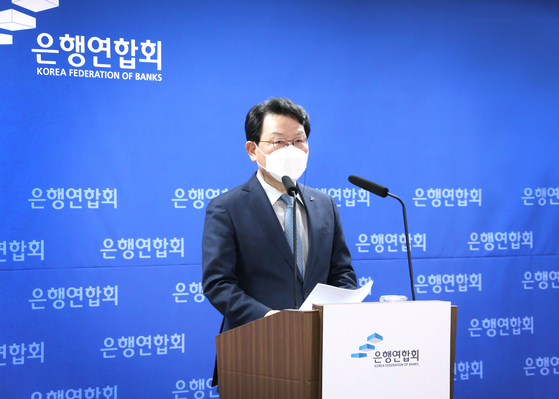 
Penalties on bank executives and directors linked to private equity fund sales are concerning and could limit bank activities, according to Kim Kwang-soo, Chairman of the Korea Federation of Banks.

At an online event held Tuesday, Kim said they “are being punished for [their failures] as supervisors. But considering realistically that bank chiefs cannot supervise the conduct of every single employee, opinions are being raised that they are being demanded to take responsibility for the consequences.”

The press event was held in celebration of the first 100 days of Kim’s leadership at the Korea Federation of Banks.

If the penalties are confirmed, their terms cannot be extended. They also won’t be able to work in the finance industry for the next three to four years after their terms end.

The penalties “raise the risk of limiting [banks’] management activities by raising uncertainties,” Kim added, “Disciplinary measures should be made based on relevant and predictable legal standards.”

During the event, Kim also stressed the importance of regulating technology companies.

He said technology firms are relatively free of regulation, unlike financial companies, calling it a form of discrimination.

Traditional banks, like Shinhan and Woori, argue that watchdogs should impose a similar level of regulation on tech companies when they expand into the financial sector.

He further pledged to continue supporting banking groups so they can help the economy recover after it was hit hard by Covid-19.