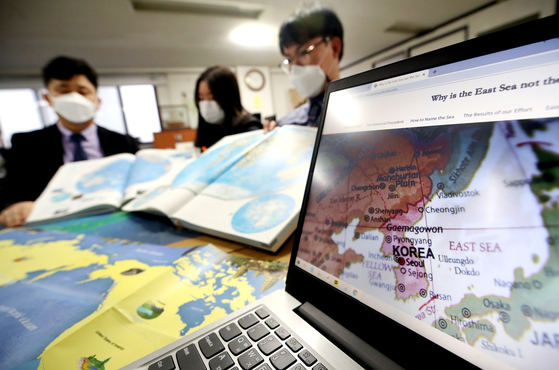 Members of the Voluntary Agency Network of Korea review maps of the East Sea in their office in Seongbuk District, northern Seoul, Tuesday as the International Hydrographic Organization (IHO) reached a consensus Monday to name global seas with numerical codes rather than specific names. Korea and Japan have struggled over the name the body of water between the two countries as Tokyo has called for the sole use of the Sea of Japan moniker. [YONHAP]

Forget the "Sea of Japan" — or the "East Sea" for that matter. The people in charge of naming seas and oceans are just going to assign it a number instead.

The International Hydrographic Organization (IHO) reached an agreement Monday to name global seas with numerical codes rather than specific names, after Korea has protested for decades Japan’s naming the body of water between the two countries.

Seoul and Tokyo have long struggled over the name of the sea separating the Korean Peninsula from the Japanese archipelago, a source of diplomatic friction between the two countries. Koreans prefer calling it the "East Sea," arguing that the name "Sea of Japan" is a reminder of the 1910-45 Japanese colonial rule over the peninsula.

The IHO Assembly convened a virtual session in which its 65 member states adopted a proposal to “designate geographic sea areas by a system of unique numerical identifiers.”

Seoul’s Ministry of Foreign Affairs said Tuesday that the IHO agreed to replace the S-23 “Limits of the Oceans and Seas,” the current IHO standard for world map production, with the "S-130" revision, which calls for referring to all seas by numbers, rather than by specific names.

Korea had been deprived of the opportunity to lobby for the name "East Sea" to the international community when the IHO published its first edition of the "Limits of Oceans and Seas" in 1929, while it was still under colonial rule. The current third edition of the S-23 was published in 1953, before Korea became a member of the IHO.

Korea has pushed for the concurrent use of the name East Sea and has raised the issue with the IHO and the United Nations frequently, arguing that historical documents show the name has been used for over 2,000 years.

IHO Secretary General Mathias Jonas made the proposal amid continued disputes over the naming of bodies of water among member states, including Korea and Japan.

The consensus reached by the IHO Assembly is expected to be finalized at the beginning of December. This revision is expected to undercut Japan’s argument citing the IHO standard for its sole use of the Sea of Japan moniker.

However, Japan’s Yomiuri Shimbun on Tuesday quoted a senior Japanese Foreign Ministry official as saying Monday, “We won the part that we should have won.”

The newspaper reported that a digital version of the chart showing sea areas in a numerical format, “was a planned compromise by the IHO that took into account South Korean public opinion to a certain extent, and the government’s position is that it was unavoidable.”

It added that a digital version of the chart would not directly affect the name "Sea of Japan," because it does not include the names of any sea areas.

“The fact that ‘East Sea’ does not appear [in the proposal of the secretary general] at all is the result of Japan’s efforts," the paper quoted a Japanese Foreign Ministry executive as saying.

However, a Korean Foreign Ministry official Tuesday called the article “distorted and not true.”

The IHO report on the consultation process of the S-23 describes that the “S-23 is kept publicly available as part of existing IHO publications to demonstrate the evolutionary process from the analogue to the digital provision of limits of oceans and seas.”

The official noted this IHO secretary general report and said, “The S-23 will no longer be produced in the future.”

Seoul’s Foreign Ministry said in a statement responding to the Japanese media report, “We laud that the IHO has made clear that it will no longer be using the S-23 as the standard, thus eliminating a major obstacle in the widespread use of the name East Sea.”