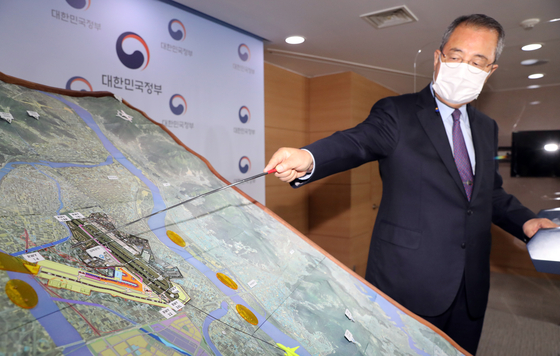 Kim Soo-sam, head of a committee of experts, announces the outcome of its review of a plan to expand Gimhae International Airport. [YONHAP]


The Moon Jae-in administration ditched plans to expand Gimhae International Airport in Busan, paving the way for a new airport to be approved just months before a mayoral by-election in Korea's second largest city.

A committee of experts appointed by the Prime Minister’s Office said Tuesday that the Ministry of Land, Infrastructure and Transport’s current plan to expand Gimhae International Airport will be fundamentally reconsidered. The committee, led by Kim Soo-sam, a civil engineering professor of Hanyang University, made the decision after an 11-month study.

According to the committee, the current plan requires major upgrades in safety control, facilities operation, environment and noise management. The plan also limits expansion in the future, the committee said.

The Moon administration is likely to revive a shelved plan to build an entirely new airport in Korea’s southeast. Moon has been a backer of a new airport since his first presidential campaign in 2012.

After Moon hinted at a possibility of reviving the new airport plan in February 2019, the local governments of Busan, Ulsan and South Gyeongsang and the Ministry of Land, Infrastructure and Transport asked the government to review the current expansion plan. The Prime Minister’s Office formed the review committee last December.

Controversy over a new airport for the Yeongnam region, which comprises Busan, Daegu and the two Gyeongsang provinces, dates to 2006, when the Roh Moo-hyun administration proposed a new southeastern airport by 2025 with a capacity to handle 10 million passengers annually.

Roh’s successors Lee Myung-bak and Park Geun-hye also vowed to build a new airport in the region during their presidential campaigns, but both backpedaled in office. Feasibility studies were conducted by both administrations, and the presidents said they wouldn’t push a plan that was so expensive and possibly unnecessary.

When the Park administration pulled the plug on the project in 2016 based on a feasibility study by a French company. Gadeok Island off the city of Busan and Miryang in South Gyeongsang were the primary competitors for the new airport.

Although the government did not announce a site for a new airport on Tuesday, it seemed almost certain that a major infrastructure project will be awarded to Busan. The ruling Democratic Party (DP) has been pushing Gadeok Island, and the Busan Metropolitan Government is backing the plan. 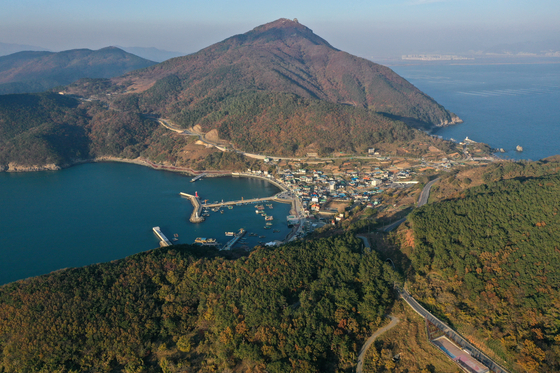 Gadeok Island near Busan is supported by the ruling party and the local government as the site of a new airport. [YONHAP]


“A possibility opens up to realize the long-cherished wish of the Busan, Ulsan and South Gyeongsang residents to build a new airport on Gadeok Island,” DP Chairman Lee said Tuesday, following the Prime Minister’s Office’s announcement.

“I have long supported the Gadeok Island new airport plan, and fortunately the acting leader of the main opposition People Power Party [PPP] Kim Chong-in said he will consider it positively,” Lee said. “Our goal now is proceeding with the project speedily.”

In an interview with the JoongAng Ilbo on Friday, South Gyeongsang Gov. Kim Kyung-soo also said the new site will likely be Gadeok Island.

“If the Gimhae expansion plan is shelved, I think it will be impossible to find a new site other than Gadeok Island,” Kim said. “Until now, the issue was whether the expansion plan was right or not and where the new airport should go. From now on, the issue is how fast we can shift to the new project.”

The Moon administration’s scrapping of the Gimhae expansion came as Busan prepares to elect a new mayor in April. Busan Mayor Oh Keo-don, the first-ever DP politician to win the post, stepped down after admitting to molesting a city worker in April.

The DP said Tuesday that the airport decision had no political angle.

“When the government started the review one year and six months ago, who could have possibly known there would be a by-election?” said Rep. Choi In-ho in his Facebook message. “The decision to scrap the Gimhae expansion plan was based on a months-long study. It has nothing to do with the election.”

Choi said it would be more political to delay the announcement. “If we announce it after next year’s by-election, critics will say we made the decision to win votes for the presidential election. If we wait further, Moon’s presidency will end. It will be irresponsible for the administration to not announce the outcome.”

Choi said the opposition PPP is supportive of the airport project for Gadeok Island. “When PPP leaders visited Busan on Nov. 5, they said they will support the early construction of the new airport,” he said. “Bipartisan cooperation is stronger than ever.”

The PPP accused the Moon administration of announcing the decision for a political purpose, but its lawmakers, particularly those representing the Busan, Ulsan and South Gyeongsang region, are supporting the Gadeok Island airport project.

Rep. Choi Hyung-du, spokesman of the PPP, said in a statement that “the Moon administration abruptly made the decision to win votes ahead of a by-election triggered by a DP mayor’s sex crime.”

It remains to be seen if the new airport will actually be built on Gadeok Island due to the costs involved. According to the 2016 study by the French engineering and consulting firm Aéroports de Paris Ingénierie, building an international airport with one runway on the island will cost near 8.6 trillion won ($7.77 billion). In contrast, expanding Gimhae airport was supposed to cost 4.7 trillion won.