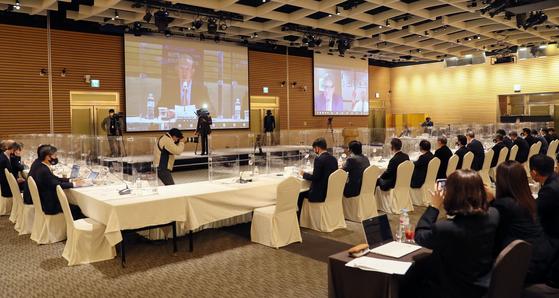 
Businessmen and economic regulators from Korea and the United States suggested an amendment to U.S. Trade Expansion Act Section 232 — a regulation utilized by the administration of U.S. President Donald Trump.

The comments came during the U.S.-Korea Business Council’s annual joint plenary session, a two-day session jointly hosted by the Federation of Korean Industries (FKI) and the U.S. Chamber of Commerce through Wednesday. Held annually since 1988, this was the first session after the U.S. presidential election.

Section 232 of the U.S. Trade Expansion Act authorizes the U.S. president to limit imports of goods or materials if they are deemed a threat to national security.

Participants from both countries demanded that the act be amended, protesting that it undermines a free international trade order and threatens an economic alliance between Korea and the United States.

“President-elect Biden may change the imposed tariff based on Section 232 or create policies to abolish them consecutively, but Korea’s carmakers still have a lot of concern,” said Kwon Tae-shin, the vice chairman of FKI.

“Republican Senator Chuck Grassley, chairman of the Senate Committee on Finance, is expected to push forward with the amendment of Section 232, which was scrapped last year, so I hope this issue gets solved in the future.”

Another hot potato during the meeting was an act on class action suits, which is being pushed in Korea. This law would permit collective lawsuits for damages if the case has more than 50 victims, regardless of industry. At the moment, this is only possible for the securities field.

Another member who volunteered to give an opinion said class-action lawsuits create an antagonistic environment towards corporations and therefore suggested that businessmen and economic officials should proactively voice their opposition during the legislative process.

Besides the legislative issues, both parties agreed to propose to respective governments a reduction of self-quarantine periods for traveling businessmen.

“Next year should be the year that the coronavirus pandemic ends,” said Choi Jong-Kun, the first vice minister of the Ministry of Foreign Affairs, who gave a keynote address. “The countries must continue free and fair economic cooperation based on multilateralism.”

Held for the 32nd time this year, the plenary session was attended by high-ranked economic officials from both governments and senior executives of Korean and U.S. companies, including Samsung Electronics, Hyundai Motor, SK, Korean Air, Amazon and 3M.

The list included First Vice Foreign Minister Choi, Yoon Tae-sik, the deputy minister of the Finance Ministry and Byun Jae-il, the head of the Korea-U.S. Diplomacy Forum. From the United States, Deputy Secretary of State Stephen Biegun and Cordell Hull, the acting undersecretary for industry and security under the Bureau of Industry and Security, were present.

The event was held at the FKI headquarters in Yeouido, western Seoul, and aired live via video conference.

“For 70 years since the Korean War, intimate economic cooperation between Korea and the U.S. was possible due to the alliance from the war,” said Huh Chang-soo, the chief of FKI and chairman of the Korea-U.S. joint plenary session.

“The Councils will do their best to enhance cooperation for the digital economy, which has become important due to the coronavirus pandemic, and also address the agenda faced by both countries.”