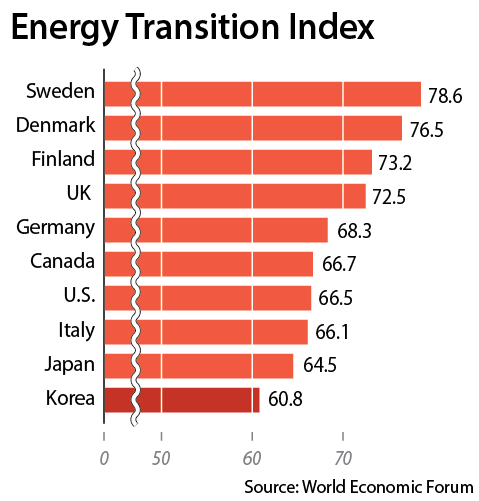 A major business lobby on Tuesday pushed nuclear energy for carbon neutrality and a stable supply of electricity, a direction that challenges the government’s move to phase out nuclear power.

The suggestion from the Federation of Korean Industries (FKI) came as leading presidential hopeful Yoon Seok-youl publicly expressed skepticism about the Moon Jae-in government’s policies to gradually discontinue the use of nuclear power plants.

The FKI said the shift was not feasible, given that the country’s geology and infrastructure are not suitable to produce the energy sufficient to substitute nuclear power.

“However, the country’s mountainous topography, high population density and the absence of transborder interconnections creates challenges for Korea to accelerate renewable energy deployment,” said a report from International Energy Agency (IEA), which was quoted by the business association.

The FKI pointed to the vulnerability of renewables to weather conditions and the potential instability of supply.

While existing reactors provide some 30 percent of the country's electricity, renewables account for 5.5 percent, according to the lobby.

The IEA report also noted that Korea had the lowest share of renewable energy among IEA member countries in 2018.

To cut greenhouse gas emissions by 50 percent by 2050, Korea ought to up the renewable portion to 50 percent to supply 212 gigawatts of electricity, according to a report released by the Ministry of Environment last year.

However, the state-run Korea Energy Economics Institute said that the maximum capacity of renewables produced in Korea is estimated to be 155 gigawatts.

It ranked at 49, scoring 60.8, according to the World Economic Forum, lower than the 68.4 average of advanced economies.

To resolve the limit of renewable energy sources and their perceived incompatibility in Korea, the FKI demanded that Korea continue to use nuclear power, adding that nuclear reactors emit no direct carbon dioxide, unlike coal-fired plants.

The request came at a delicate time as a leading presidential candidate openly criticized the Moon government’s phase-out plan.

“The nuclear phase-out policies, which were drafted in a hasty and unreasonable manner, should be reconsidered,” Yoon said during a meeting with nuclear engineering majors at KAIST in Daejeon on Tuesday.

He also played down the risks associated with nuclear reactors.

A day earlier, the former prosecutor general met with Joo Han-gyu, a nuclear engineering professor at Seoul National University, who has condemned the government’s phase-outs.

SK, Vietnam to work together on eco-friendly business