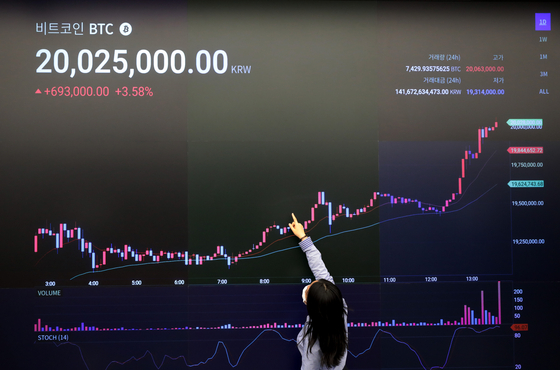 A display at Upbit, a cryptocurrency exchange, shows the price of bitcoin surpassing 20 million won on Wednesday for the first time in three years. [NEWS1]


The price of bitcoin, the world’s largest cryptocurrency, surpassed 20 million won ($18,000) on Wednesday for the first time in three years as investors started to reassess digital coins as alternatives to other assets.


The price of bitcoin reached 20.3 million won at 1:50 p.m., according to local cryptocurrency exchange Bithumb, 7.5 percent more than the closing price the previous day.

It has surged by nearly 60 percent since January, when the cryptocurrency was traded in the 8-million-won range.

High liquidity in the market due to economy stimulus policies derived from the Covid-19 pandemic have led investors to reconsider virtual coins as profitable assets compared to fiat currency or assets such as gold.

The Korean won recorded 1,103.8 against the greenback, up 2.8 won from the previous trading day. This is the lowest value of the U.S. dollar compared to the local currency since mid-2018.

The price of gold is also on the downturn since reaching its peak in August this year. After recording 78,538.9 won per gram in August, it slid to as low as 66,711.76 won on Wednesday.

Institutions are also jumping on the bandwagon lately leading to a bigger surge in digital coin prices.

It is one of the first times a mainstream service provider has adopted digital currency into its service.

Analysts say the latest surge could continue for some time, unlike the bubble that burst in 2018.

“Bitcoin was considered a bubble in 2018 but came back for a reason now,” said Han Jae-hoon, an analysts at SK Securities. “Especially with the participation from establishment players and business, it is obviously different from the brief hype created back in 2017."

Global financial firms such as JPMorgan and Fidelity recently started digital currency services. JPMorgan recently extended its banking business to cryptocurrency exchanges Coinbase and Gemini. Fidelity has been providing a custody service for cryptocurrency trading for institutional investors since 2018 and extended its service to Asia last month.

“The more economic agents accept cryptocurrency as a means of payment in the future, the higher their utility and value,” JPMorgan said in a report recently.

“The potential long-term upside for bitcoin is considerable as it competes more intensely with gold as an ‘alternative’ currency we believe, given that millennials would become over time a more important component of investors’ universe.”

Other major cryptocurrencies such as ethereum and chainlink advanced by 1.46 percent and 6.24 percent on Wednesday, according to Bithumb.