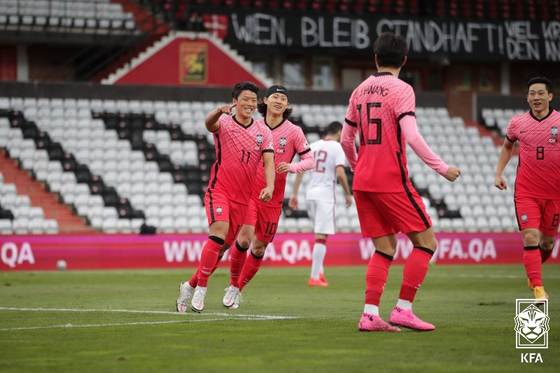 Hwang Hee-chan, left, celebrates with his teammates after scoring an opener only 16 seconds into the match during a friendly against Qatar at BSFZ Arena Admiral Stadium in Austria on Tuesday. [KFA]


The Korean national football team finally managed to pick up their 500th victory in style.

Playing a friendly match against the 57th-ranked Qatar at BSFZ Arena Admiral Stadium in Sudstadt, Austria, the Taeguk Warriors got off to a record start with Hwang Hee-chan’s opener only 16 seconds into the match. This allowed Hwang to set a new record as the fastest-ever goal scorer in the history of the Korean national team.

The 16-second goal was Hwang’s fifth career goal for the national team.

However, Qatar didn’t make it too easy on Korea as they quickly fought back with an equalizer in the ninth minute, scored by Almoez Ali.

While the two teams were tied at 1-1, Korea’s scoring duo of Son Heung-min and Hwang Ui-jo once again saved the Taeguk Warriors as Son assisted Hwang Ui-jo for Korea's second goal in the 36th minute.

"We've been playing together since we were little," Hwang Ui-jo said after the match in a Sports Time interview. "So I know what Heung-min likes and also know what kind of play Heung-min plays well with. But not just Heung-min, I think we are blending in well as a team by communicating with each other a lot."

After finishing the first half of the match with the 38th-ranked Korea taking a 2-1 lead, things slowed down in the second half. Unlike the dramatic start to the match, in the second half, it was Qatar who seemed to be pressuring Korea.

Despite the unstableness in the defensive line after the early goal, Korea successfully managed to cut off every Qatari offensive.

"After scoring early, our concentration was distracted," head coach Paulo Bento said after the match in a Sports Time interview. "Aside from that, overall, I don't think our defense was that shaky. Overall, we played well and controlled the opponent well."

As Qatar failed to add another goal, the Taeguk Warriors managed to finish their first outing of the year strong with a 2-1 victory.

Throughout the second half of the match, Korea changed their tactics a little and made a lot more long passes. Although it seemed as if the team was struggling to make it past the halfway line, Bento said that it was an intentional strategy.

"That was the match strategy overall," Bento said. "And it was executed better in the second half than the first half. It was the area I wanted [to see] and the players executed it well in the second half. As we headed into the second half, our opponent pressured us more strongly so they could turn the tables. Since we had one less day of rest than did [Qatar], we felt some pressure physically."


Although Korea appeared to struggle at some points in the match, Bento was satisfied that the strategy worked.


The game was a meaningful one as the Taeguk Warriors picked up their 500th win, while Hwang Hee-chan set a new record along the way.

"We've got to achieve this great record of picking up a 500th win," Bento said. "I'm very happy that we got to do it against a great team."

Korea can also take some comfort in picking up the win despite missing a number of starting players infected with Covid-19 last week. Being in the same position as the previous match against Mexico, Bento didn't forget to compliment his players for their hard work until the very end.

"We finished our training within this complicated situation," Bento said. "And I'm thankful to the players for making it possible. Although it was a different opponent, we fixed our problems from the previous match and they've played through this tough match until the very end."


The Qatari squad was unaffected by the outbreak, so Bento's boys had to play at a disadvantage with six fewer players on the roster than Qatar.

"After we lost to Mexico, our players really wanted to win the second friendly," Hwang Ui-jo said. "This was somewhat of our last [international] match of the year. I think it's great to finish with a win."

Although Korea suffered a loss to Mexico, Hwang still managed to score in two straight matches. Hwang says that the biggest takeaway from the two friendly matches was his confidence.

"Personally, I think it'll give me confidence," Hwang said. "I think it's important for me to keep up with the pace when I head back to my club."

This was a good redemption for the Taeguk Warriors as they had lost their last two appearances against Qatar. Tuesday's match was the first time since October 2016 that Korea has picked up a win against Qatar. Bento also got his shot at revenge, as his first loss after taking the helm of the Korean side was also against Qatar.

With the win, Korea improved its head-to-head record against Qatar to six wins, two draws and three losses.

Korea has now finished their first friendlies of the year with a win and a loss, as they previously lost 3-2 against Mexico on Saturday.

Now that Korea's first and last national team schedule of the year has completed, the players who play in Europe headed back to their respective clubs. As for captain Son, Tottenham Hotspur sent a chartered flight to bring him back to safely.

Hotspurs' head coach Jose Mourinho appeared to show his dissatisfaction toward Bento's usage of Son, as he used Son full time in both of Korea's friendlies. Since Spurs are still in season and have a Premier League match against Manchester City this Sunday, there's once again been conflict over Son's energy levels. For Spurs, Son is a crucial member this season, having already scored eight Premier League goals.