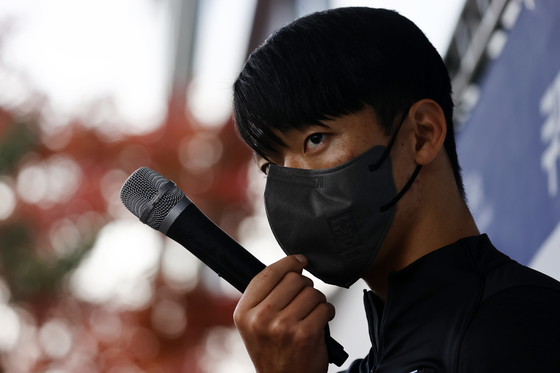 Hwang Hee-chan answers questions on Monday at Paju National Training Center in Paju, Gyeonggi, during training for the FIFA World Cup Asian qualifiers against the United Arab Emirates scheduled on Thursday at Goyang Stadium in Gyeonggi at 8.p.m. [YONHAP] 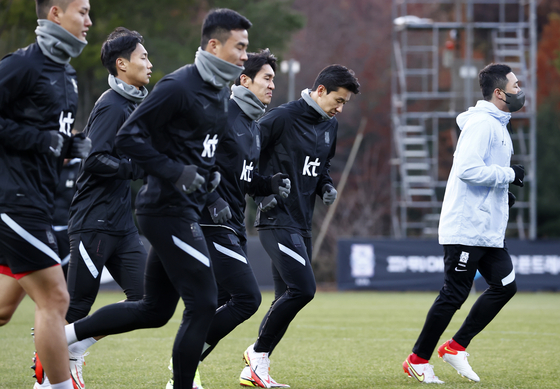 The Taeguk Warriors train at Paju National Training Center in Paju, Gyeonggi on Monday ahead of the FIFA World Cup Asian qualifier against the United Arab Emirates scheduled on Thursday. [YONHAP]


Ahead of the national team's international fixture against the United Arab Emirates on Thursday, head coach Paulo Bento announced that Wolverhampton Wanderers forward Hwang Hee-chan will take point at the front of the lineup as Hwang Ui-jo remains out with an injury.

The Wolves striker arrived at the Paju National Traning Center in Paju, Gyeonggi on Monday and will fill in for the injured Bordeaux forward for the next two matches, rather than taking his normal spot on the wing.

Hwang Ui-jo took a muscle injury during a Ligue 1 game with Bordeaux. He won’t be the only one missing from the national team, as Kim Young-gwon of Gamba Osaka is also recovering from a calf injury.

“It’s a pity that Hwang Ui-jo, who scored many points for the national team, can’t play the qualifiers this time,” said Hwang Hee-chan before national team training. "However, there are other good players on our team and we will prepare well together. I will do my best to show my best performance.”

Hwang Hee-chan has been on exceptional form lately in the Premier League. After joining Wolves this summer on loan for a year, he has already scored four goals in eight Premier League appearances with the club, including in his opening game. Although for the national team he tends to play on the wing, with Wolves, Hwang has moved across the front of the formation.

Despite worries that there isn’t much time for players playing abroad to overcome jetlag and fatigue before the national team fixtures, Hwang remains confident.

“I will overcome it," said Hwang. “Sure I am always going to be jet lagged when I return home from playing in Europe because of the time difference, the flight time and the quarantine.

“But I don’t want that to be an excuse. At the end of the day, it’s our job to show our fans the best performance that we can on the field. I will try and prepare for the games under a more positive light rather than a negative one.” 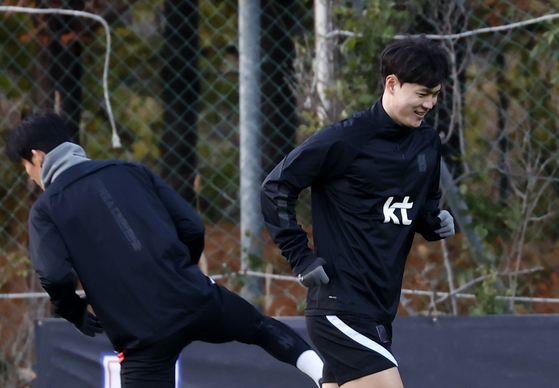 
Alongside Hwang, Suwon Samsung Bluewings forward Kim Gun-hee will be playing as a Taeguk Warrior for the first time in his career.

“I think I’ve had more than a thousand dreams about being on the national team and doing an interview,” said Kim during training. “I feel great and I want to play well if I have the chance. I can’t compare myself to Hwang Ui-jo, but I can build up the ball well. I am also confident in keeping the ball and connecting it. I will try to always be one step ahead.” 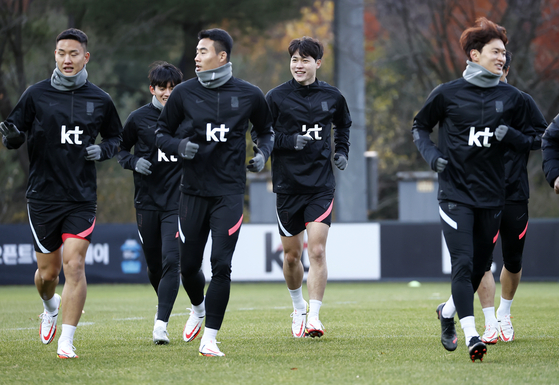 The Taeguk Warriors train at Paju National Training Center in Paju, Gyeonggi on Monday ahead of the FIFA World Cup Asian qualifiers against the United Arab Emirates scheduled on Thursday. [YONHAP]


Korea is currently in second place in Group A with eight points, behind Iran with 10. With the top two teams both advancing to the 2022 Qatar World Cup, the Taeguk Warriors will be looking to increase their lead over third-place Lebanon, who currently trail by only three points.

With four games played, Korea have yet to take a loss but have only recorded two wins in the third round of qualifiers. Korea opened the round with a 0-0 draw with Iraq at the start of September, before beating Lebanon 1-0 and Syria 2-1. The last game, on Oct. 12, saw Korea draw 1-1 with Iran.

Korea will take on the United Arab Emirates on Thursday at Goyang Stadium in Gyeonggi at 8.p.m. Spectators will be allowed in the stands after two years of playing without a crowd. Korea will then fly to Qatar to face Iraq on Nov. 16.