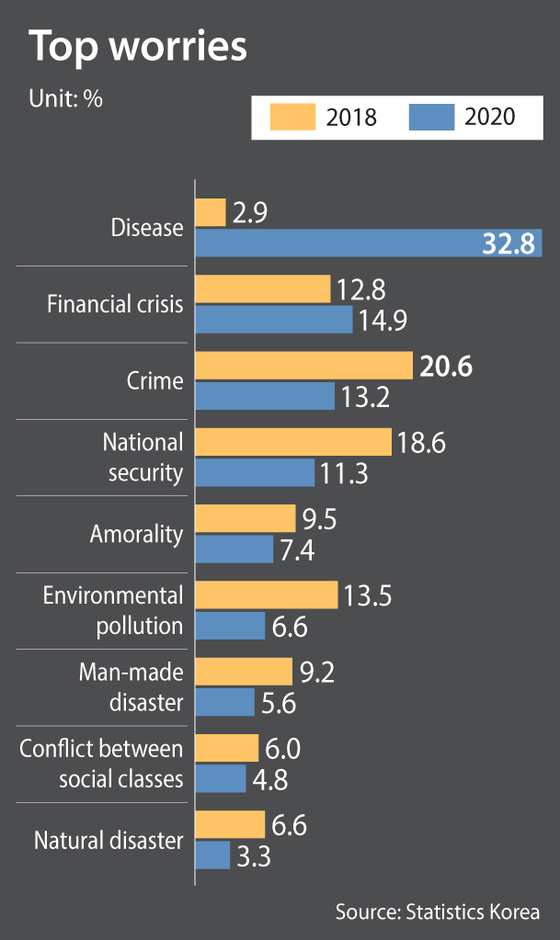 Two years ago, Koreans worried most about crime. Now, they are most worried about disease.

These are some of the findings detailed in a report published by Statistics Korea. The statistics agency interviewed 38,000 people aged 13 or above between May 13 to 28. To thoroughly understand the changes in the lives of citizen, as well as their quality of life, the agency conducts a survey every two years addressing different categories; there were five this year — family, education and training, health, crime and safety, and lifestyle.

A full 32.8 percent of the respondents said they most fear “new disease” — the number was only about 2.9 percent two years ago. Another 14.9 percent said they feel anxious about financial crisis.

In 2018, roughly 20.6 percent said they most fear crimes, while for 18.6 percent, national security tops their list of worries.

“Due to the coronavirus pandemic, citizens’ concerns shifted to the category [of novel disease],” said a spokesperson for Statistics Korea.

With the growing attention to diseases, more people are showing interest in health care. Of all respondents, some 80.1 percent said they try hard to secure adequate sleep, while 40.9 percent said they have been exercising regularly. The number was only about 77.5 percent and 38.3 percent two years ago. Multiple answers were allowed.

More than half of the respondents, or 50.4 percent, said they would describe themselves as healthy. Some 50.5 percent said they are often stressed out in their daily lives — down 3.9 percentage points compared to two years ago.

By gender, women are likely to get more stressed, with 53.4 percent compared to 47.7 percent for men.

When the respondents were asked if they think society has become safer compared to five years ago, about 38.8 percent said yes — up 11.1 percentage points from 2018. 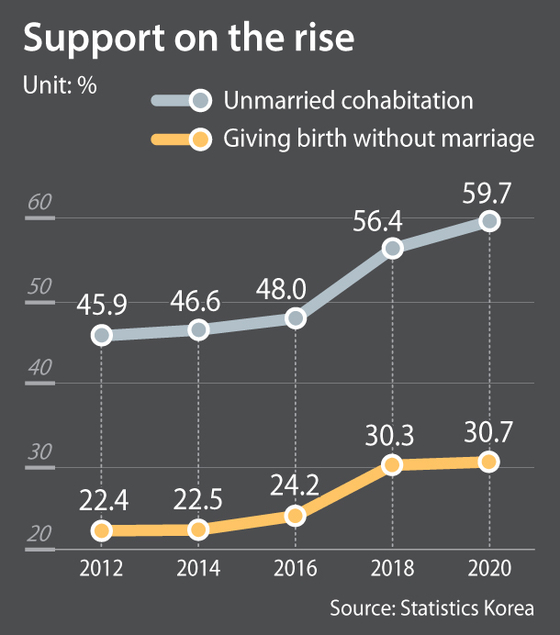 Perspectives on marriage have also changed.

The number of Koreans who are positive on “giving birth without marriage” has been increasing since 2012. A full 22.4 percent of respondents said they are positive about giving birth while single in 2012 — this increased to 30.7 percent this year.

In terms of environmental issues, fine dust was the biggest concern.

Statistics Korea this year has newly included “online learning” in the education category of the survey.

Of all respondents, about 41.1 percent said they have experienced receiving education or training online during the past year. Most people aged 10 to 19 received online education, while people in the 30-to-50 age group received it for the training in their companies. People in their 60s or above experience online learning for their hobbies or leisure time.

“The demand for online learning had been growing even before the Covid-19 outbreak,” Kang Yoo-kyeong, head of the social statistics planning division of Statistics Korea, said. “As our report aims to know about citizen awareness in details, we have been adding new categories if it is necessary after having a thorough discussion with experts.”

New gov't gets to grips with pandemic issues