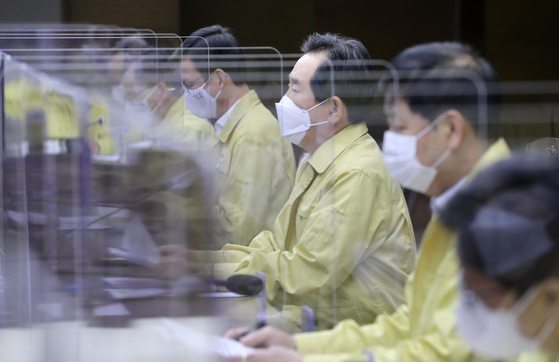 Prime Minsiter Chung Sye-kyun, third from right, speaks at a Central Disaster and Safety Countermeasure Headquarters meeting on Wednesday, in which he announced comprehensive inspections of hospitals for the elderly around the country. [YONHAP]


The government will launch examinations of antiepidemic measures at thousands of nursing homes and hospitals catering to the elderly, said Prime Minister Chung Sye-kyun on Wednesday.

Noting that such institutions have been at the center of several Covid-19 clusters in recent months, Chung announced that around 8,000 will be subject to health inspections over the course of two weeks starting Thursday.

Facilities to be inspected include 1,476 medical centers and hospitals, 6,124 nursing homes and elderly care facilities as well as 423 psychiatric hospitals. Inspections and contact tracing have been done on all patients and employees at such institutions in the greater Seoul area since Monday.

Health authorities Wednesday also announced they would be ramping up supervision of businesses deemed at high risk of spreading the coronavirus, including nightclubs, noraebang (booth-type singing rooms) and other nighttime establishments, along with stronger punishments for violators of antiepidemic regulations.

Such facilities, as well as restaurants and cafes measuring over 150 square meters (1,615 square feet), will also be subject to government inspections throughout the next weeks until Nov. 3. 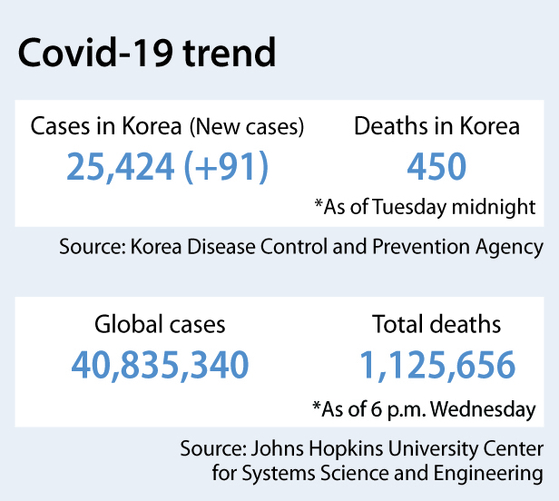 “If an establishment is discovered to have violated quarantine measures a single time, it will be subject to a fine and will be banned from receiving group customers as per our ‘one-strike-out’ system,” said Vice Health Minister Kim Gang-lip in a briefing on Wednesday.

The ban on group customers in particular is regarded as a suspension of business order, testifying to how tough Korea’s antiepidemic regulations have become after the country experienced a second wave of infections over the past few months.

The announcements came as the nation counted 91 new cases of the novel coronavirus on Tuesday, according to data released Wednesday morning by the Korea Disease Control and Prevention Agency (KDCA).

This number — a notable uptick from the 58 new cases added the day before — put the country’s total caseload at 25,424. Three more deaths were also reported, putting the toll at 450.

Of the new cases, 57 occurred domestically while 34 were from abroad, the KDCA said.

Attesting to the government’s reason for worrying about medical centers for the elderly, four more cases were linked to SRC Hospital, a rehabilitation and treatment center in Gwangju, Gyeonggi, which so far has yielded 63 cases.

Master Plus Hospital, a clinic in Uijeongbu, Gyeonggi, also produced seven new cases, putting the total number of patients in that cluster at 70.

In addition, one new infection was linked to a nursing home in Busan — which has had 81 cases so far — as well as three more linked to a hospital in Daejeon. 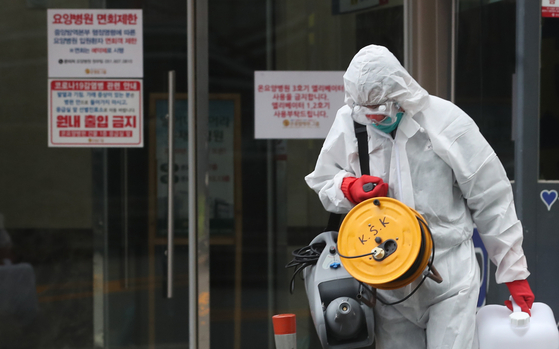 A quarantine official disinfects a nursing hospital in Busan on Wednesday as three new Covid-19 cases were confirmed in the hospital. [NEWS1]


Data released by the KDCA Wednesday showed that of the 1,072 new patients reported since Oct. 8, a total of 231 — or 21.5 percent — were linked to hospitals and medical centers.

Clusters at such hospitals prompted local governments to mount investigations before the central government’s order on Wednesday. In Busan, the inquiry led to the discovery of an emerging cluster at On Convalescent Hospital, which has so far produced three infections in one worker and two patients as of Wednesday.

Most social distancing rules will end on Monday