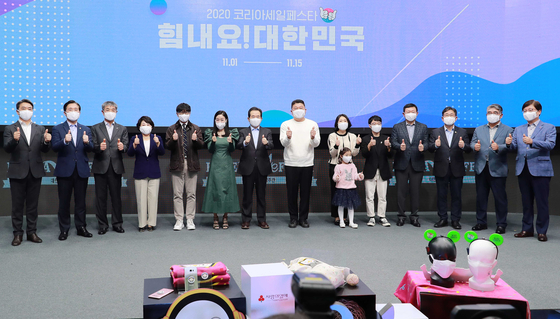 Participants celebrate the start of the Korea Sale Festa. [MINISTRY OF TRADE, INDUSTRY AND ENERGY]


The annual Korea Sale Festa shopping event actually did succeed in boosting consumption, according to statistics from the Ministry of Trade, Industry and Energy, released Friday.

The two-week event, which ran from Nov. 1 to 15, is the sixth of its kind after being introduced in 2015 with the hope of creating a Korean equivalent of Black Friday.

Until this year, sales have been slow. The highest record was 10.8 trillion won ($9.68 billion) in 2017, but that number dropped in the following years. The event's impact in boosting consumption in the private sector was also minimal, at less than 1 percent, for the past five years.

This year, however, proved different. With more brands getting involved and consumer sentiment on the rise, this year's sale outperformed previous years.

Card transaction volume went up 6.3 percent from the previous year to 37.4 trillion won. The total number of participating companies also more than doubled to 1,784, said the ministry.

“Consumer confidence has been weakened recently due to the coronavirus pandemic. We think [the event] helped bring confidence back,” said an official from the ministry.

Retailers both large and small benefited from the event, with sales growing by a record 32.8 percent.

Online shopping malls saw the biggest boost in sales, posting 3.19 trillion won, up 27 percent from the previous event, according to the Korea Online Shopping Association data.

The major department store operators — Hyundai, Lotte and Shinsegae — saw sales increase by 5.4 percent on year. High demand for furniture and home appliances contributed the most.

The event proved effective in boosting local economies, with total sales at traditional markets increasing by 25.5 percent from the previous year, according to data from the Korea Merchant Association. Daily average visitors to the event also increased by 30 percent from the normal average.

The positive effect was particularly noticeable in Daegu, with sales increasing by 90 percent at traditional markets there compared to before the event.

Despite positive results, customers say the event has still a long way to go in terms of discount rates, which are much smaller than the Black Friday deals in the United States and the Single’s Day sales event on Nov. 11 in China.

“I went on [one of the participating company’s website] to buy tires, and they were discounted around 30 to 40 percent, which was not much different from the regular discount rate,” said one commentator on Naver. “The same product was much cheaper in the open market.”

The Industry Ministry said it will analyze this year’s results thoroughly and come up with improvements.