After a decade, memorial planned for Yeonpyeong

After a decade, memorial planned for Yeonpyeong 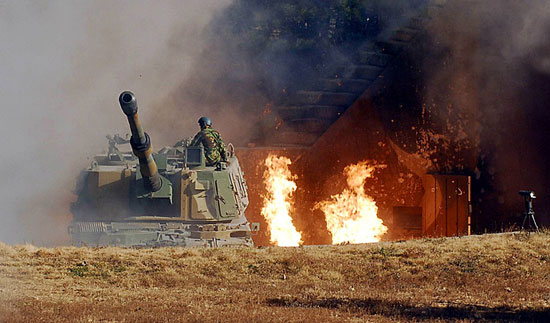 A photograph taken during the North Koreans' shelling of Yeonpyeong Island on Nov. 23, 2010, shows a South Korean K-9 howitzer returning fire at the North. [MARINE CORPS]


South Korea will memorialize a site on Yeonpyeong Island shelled by North Korean forces in an unprovoked attack a decade ago, according to Seoul's military.

A Marine Corps official told the JoongAng Ilbo Sunday that an area used to station field artillery on the island that was bombarded by North Korean artillery on Nov. 23, 2010, would be turned into a memorial.

The memorial will stand at the "gun platform where, amid the flames of the North Korean military's bombardment, we pulled out our K-9 [howitzers] and immediately returned fire," the official said.

Construction on a memorial that tourists can visit on Yeonpyeong Island, located around 120 kilometers (75 miles) off the western coast, will be complete around mid-December, the official added.

Currently, the main reminder of the bombardment of the island is the rubble of a house torn apart by the North's shelling.

The North Koreans are believed to have fired around 170 rounds from a multiple-rocket launcher, hitting various spots on the larger of the two Yeonpyeong islands including a village and South Korean military installations.

The shelling killed two South Korean civilians — both construction workers — as well as two Marines stationed on the island. Around 30 more people were injured, while most of the island's 1,780 civilian residents were evacuated on government vessels to Incheon.

South Korean troops on the island retaliated just 13 minutes after taking fire, using K-9 howitzers. They returned around 80 shells toward the North's Kaemori artillery base in South Hwanghae Province, where the attacks had originated.

The North later claimed it suffered no casualties from the exchange, but Seoul's military said the retaliation had done immense damage and likely killed five to 10 of their soldiers. 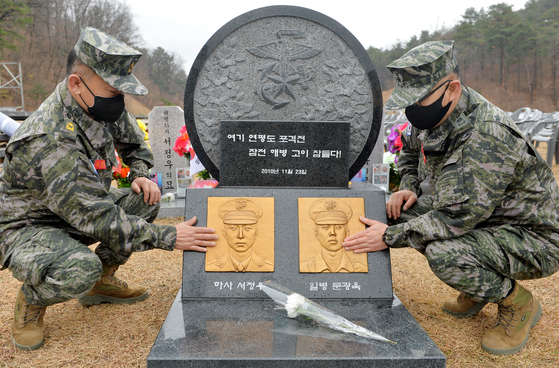 Marine Corps servicemen pay respects on Sunday at a memorial to the two marines who died during the North Koreans' shelling of Yeonpyeong Island in 2010. Monday marked the 10th anniversary of the incident. [KIM SUNG-TAE]


As to its motives, Pyongyang claimed its bombardment that day was a retaliation from Seoul's shelling of the sea between the two countries, which the North claims as its own. Disputes between the two sides over the sovereignty of the waters in the Yellow Sea have boiled over into military confrontations on several occasions, including two naval battles near Yeonpyeong in 1999 and 2002.

Analysts in Seoul and abroad at the time saw another motive related to current North Korean leader Kim Jong-un and his position as heir apparent to his father Kim Jong-il.

The younger Kim, whose profile in the regime was not clear, had abruptly been appointed a four-star general and vice chairman of the Central Military Commission that September — and may have needed some military victory under his belt.

Underscoring the theory that the Yeonpyeong attack was meant to shore up Kim Jong-un's authority, the two Kims had visited the Kaemori artillery base a day earlier.

The effort may have paid off for Kim, who quickly took over power following his father's death in December 2011.

For the dictator, the Yeonpyeong incident remains a symbolic event marking his ascension. Last year, on the ninth anniversary of the shelling, Kim visited an artillery base around 45 kilometers off South Korea's Baekryeong Island to order an artillery barrage into the nearby sea.