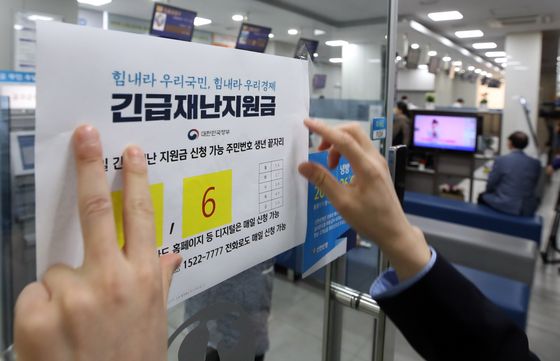 An employee posts a notice informing the public to apply for emergency government reliefs at Shinhan Bank in Jung-district, central Seoul, on May 18. [YONHAP]


Only 0.2 percent of the free money was returned despite pleas from the administration for people who don't really need the relief cash to give it back to the government.

It seems that the message from President Moon Jae-in and some lawmakers did not get through.

Only 28.2 billion won ($23.3 million), from 155,786 coronavirus relief grant recipients, was returned as of June 10, according to a report submitted by the Labor Ministry to Lim Lee-ja of the United Future Party (UFP) Monday.

A total of 13.6 trillion won was distributed in emergency coronavirus relief as of June 7, with households receiving a maximum of 1 million won. This means that only 0.2 percent of the total went back into the national accounts, far less than what the government had been hoping to raise.

The average amount per donation was 180,000 won. Most people donated only part of their government grants rather than the entire amount. Grants that were not claimed or were not included in the recent report will be classified after August 18 as donations. Currently, around 99.5 percent of households eligible for the government grants have applied, said the Ministry of Public Administration and Security.

When the government first came up with the plan of distributing coronavirus relief grants, it targeted 70 percent of the households with the lowest incomes. The government changed its stance near the general elections and expanded the grants to all households, while urging upper-class households to voluntarily return the grants to the central government.

Lee In-young, former floor leader of the Democratic Party, predicted in April that “10 to 20 percent of individuals with high income and financial stability will donate their grants voluntarily” and said the government will only need an additional 1 to 2 trillion won more to give grants to everyone if enough people returned the grants they receive.

Despite President Moon saying in May he has donated his coronavirus grants, critics claim the push was limited to those in the central government and failed to expand to the general public.

The government plans to add the donated amount to the national employment insurance fund to distribute as subsidies for job seekers and unemployed workers. The fund suffered more than 2 trillion won in deficit last year.