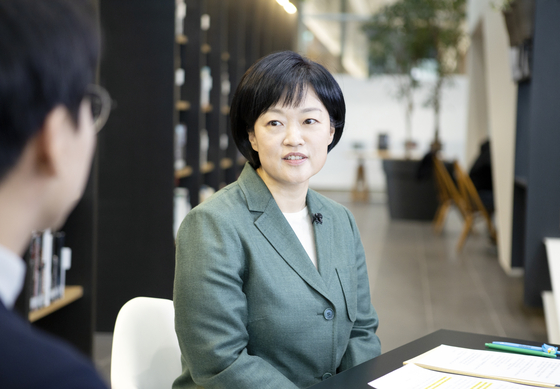 
Naver will invest 180 billion won ($162 million) into supporting small- and medium-sized enterprises (SMEs) and content creators connected with the portal platform, in the latest push to create a favorable ecosystem for the growing pool of artists and stores.

The money will go toward building data-driven analysis and technological tools through 2022, said Han Seong-sook, head of the internet company, during an online conference on Tuesday.

The CEO also unveiled a set of programs aimed at helping small merchants selling goods through Naver’s shopping platform on top of the funding, including a plan to link them with a wide range of financial and legal experts.

“We will help 4.8 million small and medium companies and 1.6 million creators receive legal and financial consultancy,” she said, heralding the launch of a new service named “Expert for SME” next year.

“The experts will consist of certified labor attorneys, customs agents and lawyers, depending on the type of request,” Han said.

The head went on to tease upcoming services under development as the portal service provider expands further into commerce, media streaming and finance through its Naver platform.

Another possible service to be made available next year is a digital identification feature that allows users to keep digitized certifications ranging from driver’s licenses to student ID cards.

Naver is also considering releasing a paid subscription-based service for users of its news section, while declining to detail the specifics of the service.

“The accumulated number of Naver News subscribers totals around 20 million,” Han said, “As the number grows, [media companies] want to experiment with the paid model.”

Han also expected a new joint venture between Naver and SoftBank to help the Korean company bring its content and services overseas.

She took note of its webtoon business as the comics segment widens readership to Asian countries, the United States and most recently Europe.

Naver reorganized its corporate structure to designate its U.S. subsidiary as the main unit for its webtoon business in May.

In line with the bid to boost its presence overseas, a recent 600-billion-won stock swap with CJ could play a pivotal role.

“[Naver and CJ] have just formed a consultative team to discuss how the two companies will cooperate under the partnership,” she said. “As for the plan for logistics, we are in discussion with a focus on global expansion.”

When the high-profile deal was announced last month, many speculated that Naver would use CJ Logistics, Korea’s largest logistics company, to carry out the delivery of goods sold by Naver Shopping or purchased through Naver Pay.

With the media event held a day after Google’s decision to postpone the introduction of a 30 percent commission fee on all in-app purchases, the CEO took a swipe at the Mountain View, California-based company.

“Google needs to think hard,” she said, “As it makes a big profit in the Korean market, it should take the conditions of the market into account.”