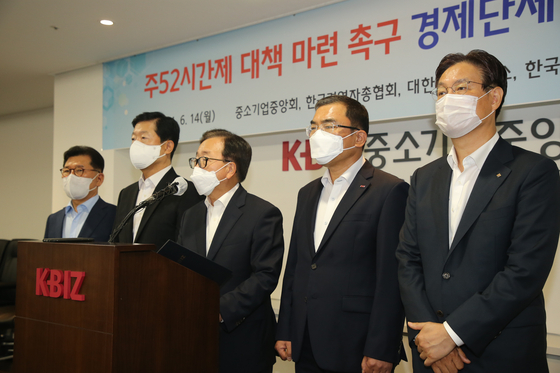 Representatives of five business lobbying groups call for the postponement of the 52-hour workweek for small companies on Monday at the office of KBIZ in Yeouido, western Seoul. [KBIZ]


Major business lobbying groups called on the government on Monday to delay the introduction of the 52-hour workweek for small and medium-sized companies for one year, arguing that the companies aren’t ready to comply with the rule.

The workweek mandate is scheduled to come into effect in July for companies with fewer than 50 employees. Larger corporations had to start implementing the 52-hour workweek in 2018.

Business associations -- including Korea Chamber of Commerce and Industry, the Korea Federation of SMEs (KBIZ) and the Korea Enterprises Federation - issued a joint statement requesting that the new rule be postponed for one year.

“With businesses still feeling the pinch of the pandemic, the 52-hour workweek system will have a big impact on businesses with fewer than 50 employees,” the groups said in the statement.

Other participants include the Korea International Trade Association and the Federation of Middle Market Enterprises.

The groups said that shipbuilding, casting and welding businesses will be hit hardest by the 52-hour workweek since some of their production lines must operate around the clock.

“Many of casting and heat-treatment manufacturers should operate 24 hours a day, with employees working in two shifts,” said Seo Seung-won, a vice chairman at the KBIZ.

“To run three or four shifts, the businesses would have to hire more people, but they have trouble finding workers,” the vice chairman said.

Of the 207 companies in those businesses surveyed, 44 percent said they are not prepared for the system, and 27.5 percent forecast they won’t be ready in one year.

The government allowed a 9-month grace period for the corporations with more than 300 workers and one year for the companies with head counts between 50 and 299.

To adapt to a possible surge in orders as the pandemic situation improves, the groups demanded that the government apply the special exemption program to the small companies.

The program waives the 52-hour system for select firms under certain conditions when the workers agree to the exemption.

Ensuring flexibility in the 52-hour workweek