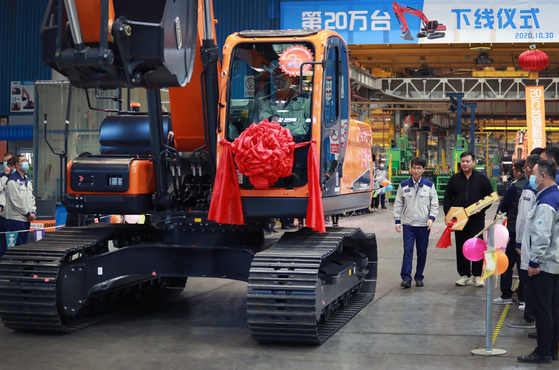 Hyundai Heavy Industries Holdings on Tuesday reported a regulatory filing that confirmed its submission of a proposal to purchase Doosan Heavy’s 36.07 percent stake in Doosan Infracore.

Hyundai Heavy Industries Holdings took part in the bidding in a consortium with KDB Investment, a subsidiary of the state-run Korea Development Bank.

Hyundai Heavy Industries Holdings has been seen as a strong candidate to win the bid due to the synergy it could generate with its subsidiary Hyundai Construction Equipment, Korea's No. 2 construction equipment maker after Doosan Infracore.

Ready-mixed concrete maker Eugene Holdings also took part in the bidding with the goal of diversifying its business.

GS Construction, which was seen as another strong candidate, did not take part in the bid. Private equity fund MBK Partners, which was also included on the shortlist of six preliminary bidders, did not submit a bid.

GS Construction “hasn’t confirmed enough information in the process of conducting due diligence. Also, there are still uncertainties involving [Doosan Infracore’s] trial,” said Son Jae-eon, a spokesperson for GS Construction. “Doosan hasn’t made it clear whether it will be responsible for any liabilities [that could be caused by the loss of the ongoing trial]. But we will continue to observe the process of the deal,” Son added, implying it could take part in a future bidding round.

GS Construction took part in the preliminary bidding in a consortium with Dominus Investment.

Doosan Infracore is currently in a legal battle with its financial investors.

In 2011, a group of financial investors including Mirae Asset Global Investment Private Equity acquired a 20 percent stake in Doosan Infracore China on the condition they retrieve the investment after the Chinese unit goes public within three years.

The investors are currently waiting for a Supreme Court decision. In the appeals trial, the court took the side of the financial investors. If the ruling isn’t overturned, Doosan Infracore could face up to 700 billion won ($598.44 million) worth of debt, which is the total amount of investment the investors injected plus the interest that has piled up over the years since the issue was taken to court.