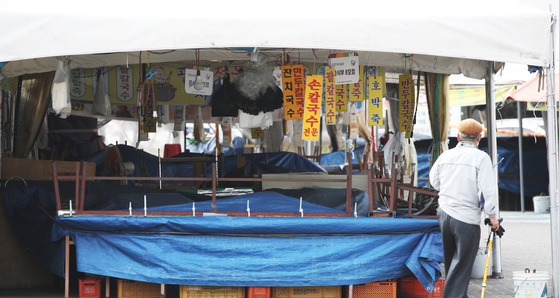 Stores at Moran Market in Seongnam, Gyeonggi, are shut down on Tuesday as the government elevated the social distancing level to 2 amid the resurgence of Covid-19 infections. The traditional market was scheduled to open on Nov. 24, 29 and Dec. 9, but the plans were all canceled. [YONHAP]


The main opposition party on Tuesday proposed slashing funding from President Moon Jae-in's Korean New Deal projects to pay for a third round of emergency relief grants as the country faces a resurgence of coronavirus infections — a plan that was immediately rejected by the ruling party.

“We want to make timely payments of relief funds for the businesses and households that are directly hit by the third wave of coronavirus infections,” said Rep. Lee Jong-bae, chief policymaker of the People Power Party (PPP), during a party meeting in the morning.

But the opposition party's proposals face an uphill battle in the National Assembly, where the ruling Democratic Party (DP) holds a majority sufficient to pass its legislative priorities with or without the support of other parties or lawmakers. 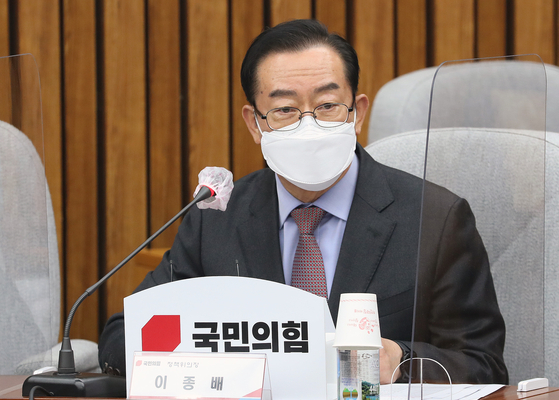 
The policy committee of the PPP announced details of its budget plans in a press release, including "a program to vaccinate all people, emergency child care programs and assistance for the vulnerable populations and farming villages."

For the livelihood assistance programs to combat the economic effects of the coronavirus, the PPP proposed spending 3.6 trillion won ($3.24 billion) on a third round of emergency relief grants.

The PPP said it also wants to spend money to support the vulnerable populations such as people with disabilities and the elderly, as well as children from poor families. Budgets to help farmers whose crops were ruined by this year’s record-breaking flooding should also be increased, the PPP said.

Acting leader of the PPP Kim Chong-in said Monday that the government needs to include the third round of emergency relief funds in the budget bill for next year.

“Infections are growing, and many started talking about relief funds,” Kim said. “We don’t have much time before we have to pass the budget, so we must start preparation now. It is unacceptable to pass the 2021 budget bill on Dec. 2 and talk about a supplementary budget in January to pay the relief funds.”

The PPP recommended funding the relief payments by slashing budgets earmarked for President Moon's “New Deal” projects. The Moon administration has proposed 21.3 trillion won in funding for those projects next year.

In an interview with MBC radio on Tuesday, Rep. Kim Young-jin, deputy floor leader of the DP, said there is no money to finance another round of relief payments.

"Unless the government issues bonds, there is no resource to fund the project,” he said. “Even if we strike a deal with the PPP within a week, it is physically impossible to include it in next year’s budget bill."

He added no study was done to decide the details for another round of emergency relief payments. Typically, such funding proposals must be accompanied by studies to determine the number of likely recipients and how much relief is appropriate.

“One week is not enough to conduct the survey and make decisions on details,” he said.

“They are not talking about a pure increase of the budget,” Han said. “And we won’t accept it.”

The Blue House declined to comment on the issue.

“Various ideas were presented, so we will take them as just ideas,” a presidential aide said Tuesday. “It is inappropriate for us to talk about it now.”

Political observers said the PPP’s push for a third round of relief cash to the people is intended to influence the Seoul and Busan mayoral by-elections in April.

In March, President Moon announced a plan to provide government relief to 70 percent of the country’s households. On the eve of the April general elections, the government agreed with the DP's proposal to grant emergency relief funds to all families. The United Future Party, the predecessor of the PPP, fiercely condemned the move, accusing the DP of effectively buying votes.

The DP won a landslide victory in the legislative election, and the government spent more than 14 trillion won to pay relief money to all households starting in May.

In September, the government spent another 7.8 trillion won in a second round of relief payments to small businesses and people affected by the resurgence of the coronavirus in mid-August. Unlike the first round, the payments were targeted toward vulnerable populations such as those self-employed workers, freelancers and low-income households.

DP plans to ram through extra budget on its own