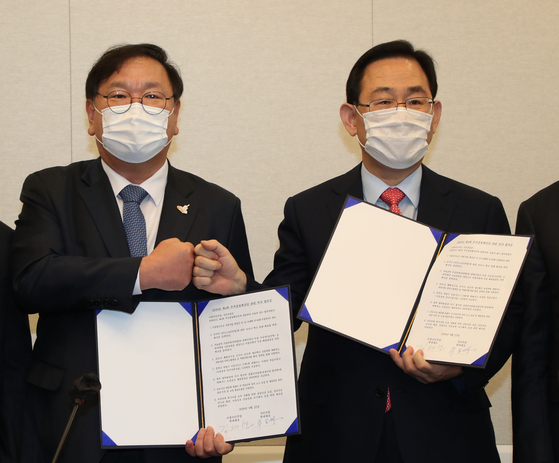 
The ruling Democratic Party and opposition People Power Party both made compromises on a fourth supplementary budget of 7.8 trillion won ($6.9 billion), coming one step closer to a final deal.

If approved, four supplementary budgets totaling almost 67 trillion won will be spent this year, a record and a signal of the government's desperation to tackle an economic crisis touched off by the global pandemic.

The two parties, who have been negotiating since late Monday, agreed to cut back a widely ridiculed 20,000-won telecommunication bill subsidy that was supposed to be given to every Korean.

The parties agreed to limit the payments to people between the ages of 16 and 34 and senior citizens 65 or older.

The Democratic Party said it decided to exclude people in their 40s and 50s because most have stable incomes.

In return for lowering the subsidy, the Democratic Party was able to gain some ground on financing of vaccinations, specifically increasing the budget for purchasing coronavirus vaccines. The budget would be used to buy coronavirus vaccines for 10.37 million additional people.

The government had earmarked money in an earlier supplementary budget for vaccinating 30 million people if a successful vaccine is developed.

The opposition party strongly opposed the phone bill subsidy since it was first proposed by the Democratic Party.

During a meeting with President Moon Jae-in at the Blue House on Sept. 9, ruling party leader Lee Nak-yon said peoples' phone bills went up during the pandemic because they spent more time on computers and their smart phones due to social distancing measures.

The opposition party claimed the giveaway was a waste that would have no ripple effect on the general economy. It said it would only benefit the large telecommunication companies. It demanded more free flu shots.

The revised budget has been expanded to include middle schoolers aged between 13 and 15. Families will receive 150,000 won for each middle-school child.

Additionally, room salons, a Korean form of hostess bar, and cola tech joints, no-alcohol dance clubs for teenagers, will also be eligible for a 2-million-won subsidy for small businesses.

Previously the government agreed to give a maximum 2 million won to small businesses negatively impacted by heightened social distancing regulations such as internet cafes and noraebang (singing rooms). That excluded room salons and cola-tech joints.

“We are not trying to promote such entertainment, but these are businesses that have suffered heavily as they were forced to close [during the heightened social distancing],” said Park Hong-keun, a Democratic Party lawmaker. “If we do not support businesses that strictly cooperated in the quarantine efforts, we won’t be able to ask them to do the same when another major crisis emerges.”

DP plans to ram through extra budget on its own