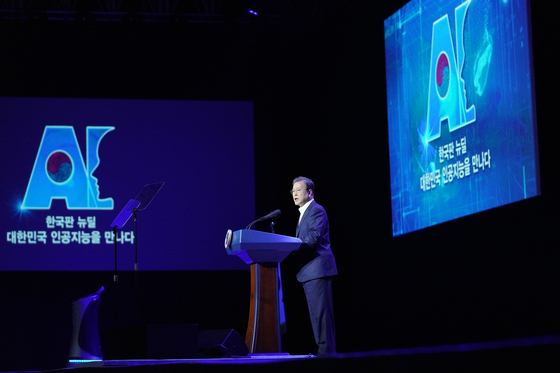 The Sapeon X220 is Korea’s first chip for data centers powered by AI, according to the telecom company.

“Its deep learning computation speed is 6.7 kilo-frames per second, which is 1.5 times faster than that of graphics processing units [GPUs] that are being widely used by AI-service companies,” said SK Telecom in a statement, adding that it consumes 20 percent less power than GPUs.

The new chip will be used by SK Telecom’s digital assistant Nugu to improve voice recognition next year. Security affiliate ADT Caps will be using it to improve the performance of its AI-based video monitoring service.

The event jibed with the president's goal for Korea to develop an AI chip comparable with dynamic random-access memory (DRAM), a memory chip that Korean chipmakers dominate the market for.

“[The government] will grow AI chips as the next DRAM,” he said during the event, reiterating a previous government pledge to invest 1 trillion won ($904 million) in the advanced chip sector by 2029.

Naver demonstrated a robot capable of fine-tuning the degree of force it uses, following a speech by Seok Sang-ok, chief executive of Naver Labs.

KT underscored its ongoing collaboration in AI research with Hyundai Heavy Industries, LG U+ and other institutions.

The team developed techniques powered by AI to curb the spread of infectious disease and boost efficiency on industrial sites.

Kakao reaffirmed its commitment to fully deploying AI in its products and services especially in mobility and cloud-based co-working tools.

Moon encouraged participating companies to be more active in investment and praised the role of tech companies in containing the spread of the coronavirus.

The Wednesday event was intended to commemorate the passage of a year after the president announced a set of programs to fuel the growth of AI research.

At the time, he pledged an expanded budget of 1.7 trillion won for expanding the area and regulatory reforms.