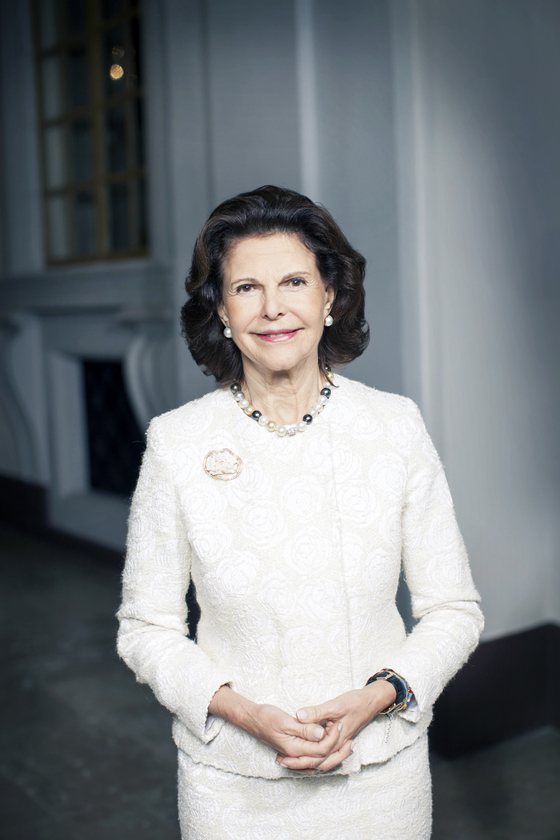 
No one should have to deal with a loved one suffering from dementia on their own, said Queen Silvia of Sweden, who cared for her mother in her final years after she was diagnosed with the illness.

“One day my mother said to me, ‘I don’t remember anything of my life,’ so I decided to make a photo album of all the important events in my mother’s life, and I also wrote down the names of the persons and indicated how they were related to one another,” wrote Queen Silvia to the Korea JoongAng Daily on Wednesday in an email interview ahead of a forum on dementia organized in Seoul. “This helped my mother to remember, and the album was a great help to the nurses who treated her at this time.”

Queen Silvia’s mother, Alice Sommerlath, was diagnosed with dementia in the final years before her death in 1997 at the age of 90. As she cared for her mother, the queen saw the need for the country to have a special facility to focus on dementia care and treatment.

“I realized that many people, at that time, had very little knowledge about dementia,” she said. “My mother’s nurses had long experience of working with elderly people. But in general, nurses and doctors were inexperienced when it came to treating dementia. Dementia was more or less regarded as a normal part of older people’s lives. Once dementia was regarded as a disease, I founded Stiftelsen Silviahemmet and started the education for nurses.”

Founded in 1996, Stiftelsen Silviahemmet became a pioneering dementia care institution in Sweden. The institution offers training courses and education on caring for dementia patients for nurses and family members.

Sweden has experienced aging population earlier than most nations, with 20 percent of its population today aged over 65.

Korea, one of the fastest-aging societies, is set to become the world’s most aged society by 2067, with nearly half of its population being over 65, according to a study by Statistics Korea.

Dementia, found most commonly among people aged over 65, is an illness suffered by around 50 million people around the world. Both the Swedish government and Korean government have adopted a national strategy on dementia as of 2018.

After founding Stiftelsen Silviahemmet, the queen continued her work on raising awareness on the illness globally. One of the top international conferences on dementia, the Dementia Forum X, is supported by the Swedish royal family. The forum is being held partly virtually in Korea from Wednesday to Friday at Coex.

“This year, the Covid-19 pandemic has affected everyone, everywhere,” Queen Silvia wrote in a congratulatory message to the forum. “For people living with dementia — and for their loved ones — these are difficult times. [But 2020] has also been a year of promising developments in the dementia field. I firmly believe that research, education and knowledge are powerful tools in combating stigma, raising awareness about dementia disease, and developing a better care.”

The following are edited excerpts of the interview with the queen in which she relayed her personal experiences in caring for her mother after she was diagnosed with dementia and some of her latest projects to transform dementia care in Sweden.

Korea is home to over 750,000 people living with dementia. What would you like to say to patients of dementia in Korea, as well as to their family members?

Despite the difficult disease there is always hope. With support, it is possible to live a good life. For the person affected it is important to continue with activities still possible to do. Research tells us that being socially and physically active, and taking care of one’s physical health, is important for both the person with dementia and the family. Dementia is difficult for the family members, and it is important to ask for help when needed. The best [thing] is to speak with, and get advice and support from, professional caregivers. Providing care for a person with dementia is not a single person’s job.

In pushing for national attention on dementia care, what were some of the foundational changes you began with?

The challenge of dementia was sadly brought to me when my mother was affected. The importance of skilled professionals with the right knowhow became very clear. This experience was the base for the foundation I started 24 years ago — Stiftelsen Silviahemmet. Silviahemmet has since then educated and trained care staff as well as family members. These education programs are spread in Sweden as well as in other countries. Each year the foundation educates more than 10,000 persons in dementia care for quality of life.
Twelve years ago, Silviahemmet was asked to start a national competence center for dementia together with a gerontological research center. The Swedish Dementia Centre is now spreading knowhow to care professionals, family members and society by free of charge web-based education programs with more than 500,000 users.

In Korea, home-care for the elderly is not as widely instituted as it is in Sweden. Can you tell us about your recent project with IKEA on designing homes for people with dementia?


The houses were originally an idea of mine that I shared with Mr. Ingvar Kamprad, the founder of IKEA, over a cup of tea.
I told Mr. Kamprad about my idea and how I wanted to be able to help people living with dementia, to be able to keep living with their partner in a home that is adapted for the patient’s needs. The home must be adapted in order to diminish difficulties for the person with dementia. And it must look like a normal home. More than 100 adaptions were built into the houses, […] and also created a product line called Omtanksam, meeting the needs for elderly and people with dementia.

As you grow older, what are some perspectives that you are finding anew in regards to elderly care?

I have realized that it is very important to introduce different kinds of facilities and adjust older people’s homes to become safe homes in which people affected with dementia can continue to live. For example, different kinds of alarms can be installed and good lighting is important. In this new and difficult situation, it is also important to ease as much as possible the life of the affected person’s partner. 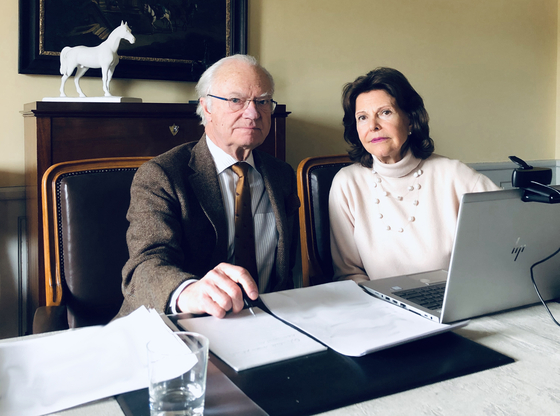 The king and queen in Stenhammar Castle in 2020. [ROYAL COURT OF SWEDEN]

You met with President Moon Jae-in and First Lady Kim Jung-sook during their visit to Sweden last year. Kim’s mother is suffering from dementia. What were some of your memorable conversations with her?

For readers in Korea interested in attending the Dementia Forum X [DFx] in Seoul, could you tell them what to expect? What factors may set it apart from other conferences on dementia?

The purpose of DFx is to promote new ideas, collaborations and increase global awareness. The aim is also to bring a broader perspective to not only care and research, but also the civil society and business. We need to work together to manage the demographic development.

How can the international community best come together in their efforts on dementia care and research? How do you think Korea and Sweden can work together?

We need to collaborate much more to find solutions that will affect both people living with dementia right now, but also the family and for the years to come. We need to visit each other and discuss together. The number of people affected with dementia increases throughout the world, and we should therefore collaborate regarding research and best practices.

The queen and her final media journey (KOR)