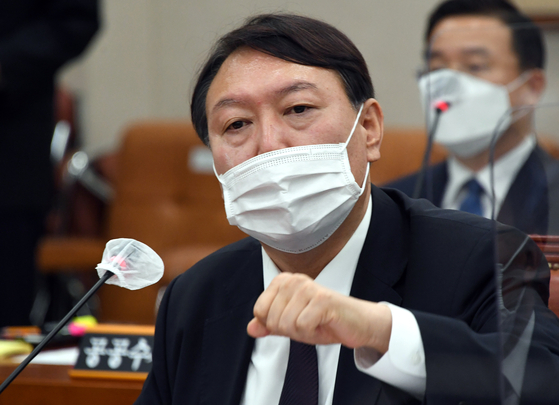 
The ruling party on Wednesday pushed for a parliamentary investigation into Prosecutor General Yoon Seok-youl over suspected ethical and legal breaches raised by the justice minister, but blocked the opposition’s plan to invite the top prosecutor to the legislature to hear his side of the story.

“The Ministry of Justice yesterday suspended Yoon and requested a disciplinary process against him,” Chairman Lee Nak-yon of the Democratic Party (DP) said in the morning. “The charges against Yoon, revealed by the ministry, are shocking.”

Lee urged the party to start a parliamentary investigation into Yoon and the ministry to swiftly carry out a disciplinary process requested by Justice Minister Choo Mi-ae.

Tensions between Choo and Yoon reached a new peak on Tuesday, when the justice minister held a surprise press conference in the evening and announced an unprecedented move against the country’s top prosecutor. 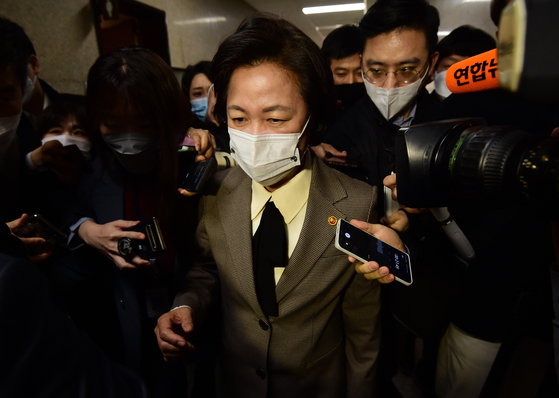 Justice Minister Choo Mi-ae is surrounded by reporters at the National Assembly on Wednesday. [YONHAP]


Cho announced that she had suspended Yoon from duty and started a process to discipline him because an internal investigation by the ministry discovered that he had committed serious and grave illegalities such as unlawful surveillance of judges and violated professional ethics. She said Yoon had violated his required political neutrality by hinting at a possible political career after his term.

Yoon immediately denied all the accusations and said he would start a legal process to fight Choo's decision.

The main opposition People Power Party (PPP) on Wednesday said President Moon is responsible for doing nothing to resolve the snowballing feud between the top justice officials. “Moon is actually enjoying this situation, and that is a bigger problem,” Rep. Joo Ho-young, floor leader of the PPP, said.

According to the Blue House, Moon was briefed about Choo’s decision to suspend Yoon shortly before her press conference on Tuesday and made no comment.

Other PPP lawmakers including Chung Jin-suk and Yoon Young-seok said Moon was a “coward” to keep his silence.

The PPP also tried to invite Yoon to a National Assembly Legislation and Judiciary Committee session on Wednesday to describe his position, but their plan was effectively blocked by the DP.

The PPP lawmakers asked Chairman Yun Ho-jung of the committee, a DP lawmaker, to open a session, informing him that the prosecutor general had agreed to attend and speak.

According to the law governing the National Assembly, a committee must hold a meeting when more than one-fourth of the members make a demand. If the chairman refuses to do so, the chief negotiator of the opposition will have the right to host the meeting.

Instead of rejecting the request, Chairman Yoon opened the session and then closed it after 15 minutes. When a meeting is closed, no new meeting can take place on the same day, according to the National Assembly Act.

“Yoon was on his way to the National Assembly,” Rep. Kim Do-eup of the PPP said after the session was closed. “Choo made public her argument, and Yoon must have things to say. We wanted the people to hear his side of the story and decide, but the DP blocked it. It seems the DP and the administration are trying to hide something.”

The PPP lawmakers said they will try to arrange another session with Yoon for Thursday.

The DP said Yoon was insulting the legislature.

“We didn’t agree to his appearance,” Rep. Back Hye-ryun said. “It is unacceptable that he consulted with a few opposition lawmakers and arranged his appearance at the National Assembly.”

While most accusations were previously reported by the media and dismissed by Yoon, one new allegation was made at Choo's press conference. Choo said that Yoon had conducted illegal surveillance activities against judges presiding over high-profile cases — including the trial of former Justice Minister Cho Kuk.

The Supreme Prosecutors’ Office denied late Tuesday that it has conducted illegal surveillance on judges who were presiding over trials of former Justice Minister Cho and senior members of the administration accused of abusing power to influence a 2018 Ulsan mayoral election. Judge Kim Mi-ri of the Seoul Central District Court is in charge of the two trials.

Choo said the office had researched the judges’ past rulings, family relations and reputations.

The Supreme Prosecutors’ Office said that did not constitute illegal surveillance. It said it simply collected information available to the general public.

“We didn’t have any illegal surveillance activities such as putting a tail on a judge,” the office said. “We collected open information to decide whether we should ask a judge to recuse from the case or not.”

A senior prosecutor who collected information on the judges for a report said Wednesday that it was a legitimate part of the prosecution’s job.

Seong Sang-wuk, a senior prosecutor at the Goyang Branch Office, posted a message on the prosecution’s intranet saying he had created a report last February. “I gathered information from media reports, information on internet portal sites and Google,” he said. “When necessary, I made an inquiry over the phone.”

Stressing that there was no illegal activity involved in creating the report, Seong said the report was compiled to support prosecutors during major trials. He said the report was not about the judges in charge of trials of members of the administration or former Justice Minister Cho.

More prosecutors also responded angrily to Choo’s action. Rank-and-file prosecutors started posting criticisms of Choo on the intranet of the prosecution. Many used their real names instead of hiding behind aliases.

“It was a precedent that the prosecutor general can be suspended by a politician-turned-justice minister for ordering an investigation protested by powerful members of the administration,” wrote Kim Gyeong-mok, a prosecutor at the Suwon District Prosecutors’ Office.

Senior prosecutors also issued criticisms. “To suspend the prosecutor general, you should present acceptable reasons, grounds, legitimacy and justification, but you can find none,” wrote Kim Su-hyeon, a senior prosecutor at the Jeju District Prosecutors’ Office.

Signs also grew that prosecutors would start a group action to protest Choo’s suspension of Yoon.

Junior prosecutors working as researchers at the Supreme Prosecutors' Office held a meeting and issued a statement denouncing Choo. "The justice minister's action infringes upon the independence of the prosecution and seriously undermines the rule of law," the statement said. Of 32 researchers, 28 signed the statement.