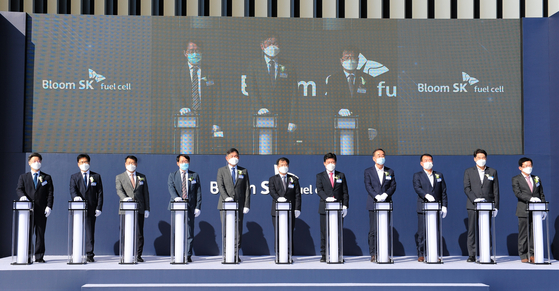 SK Engineering and Construction (SK E&C) is getting serious about the new energy business.

The joint venture was made in the hope of starting the domestic production of solid oxide fuel cells (SOFC), an eco-friendly distributed power generation device which generates electricity through the chemical reaction between oxygen and hydrogen extracted from liquefied natural gas.

This is not the first partnership between SK E&C and Bloom Energy.

Both parties signed an exclusive domestic SOFC distribution deal in 2018, which was SK E&C’s first step into the fuel cell business. Bloom Energy and SK E&C signed a joint venture agreement in the same year and began test production of SOFCs this July. The yearly production quota started at 50 megawatts per year and will expand to 400 megawatts by 2027.

It is estimated that SK E&C’s collaboration with more than 130 domestic companies will act as a stepping stone for small companies’ goods to reach overseas markets as well as being a boost for the area around Gumi, North Gyeongsang, where the factory is located.

The company announced that an SOFC facility engineering, procurement and construction deal was made with American data center management company Equinix. With this deal, SK E&C will begin constructing a 6.4 megawatt SOFC facility in Equinix’s data center in San Jose, California.

Additionally, SK E&C, SK Advanced and Bloom Energy signed a memorandum of understanding during the ceremony.

By using hydrogen produced as a byproduct at SK Advanced’s Ulsan propane dehydrogenation facility, the three companies aim to produce materials for SOFC production. The SOFC for this test project is projected to be built in the Ulsan facility before 2022.

Along with the fuel cell development, SK E&C is expanding its green business as well.