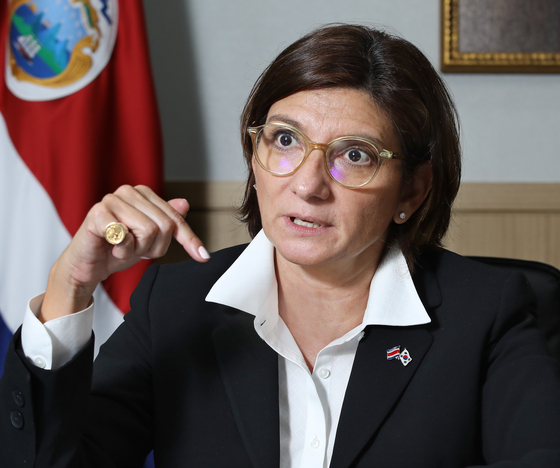 Vice Minister for Bilateral Affairs and International Cooperation of the Republic of Costa Rica Adriana Bolaños Argueta speaks with the Korea JoongAng Daily at the Costa Rican Embassy in Seoul during her visit to Korea last week. [PARK SANG-MOON]


Costa Rica considers Korea as one of its closest partners in Asia, especially as it prepares for a green and inclusive recovery from the Covid-19 pandemic, said Vice Minister for Bilateral Affairs and International Cooperation of the Republic of Costa Rica Adriana Bolaños Argueta during her recent visit to Korea.

“The pandemic has caused many consequences which cannot be met alone by a single country,” Bolaños told the Korea JoongAng Daily at the Costa Rican Embassy in Seoul last week. “At this time when global solidarity is so important for all of us, we are really happy to talk with Korea about the possibilities we have together for green and inclusive recovery.”

Bolaños’s trip to Korea from Nov. 23 to 27 was the first high-level visit of a Costa Rican government official to any nation since the Covid-19 pandemic hit earlier in the year.

Over 95 percent of electricity generated in Costa Rica is renewable.

“Deputy Minister Bolaños, welcoming the vice minister’s suggestion, conveyed hope to work actively with Korea in order for Costa Rica’s decarbonization plan and digital economy policy to succeed on the basis of Korea's advanced technology and knowhow,” the ministry said.

One such collaboration, Bolaños said, could be on Costa Rica’s latest research project on antibodies for Covid-19.

“The Clodomiro Picado Institute [ICP], an academic unit of the University of Costa Rica, is working on development and production of antibody-based medicines to provide novel therapeutic solutions to Covid-19 morbidity,” Bolaños said. “The pandemic has shown that connectivity [between various sectors] and technology are the future. Korea has a lot of experience, especially when it comes to research and development [R&D] in biotechnology.”

In the meeting, the Korean Foreign Ministry conveyed hopes that more Korean companies would partake in Costa Rica’s urban rail construction project in the greater metropolitan area and digital financial integration system project, cooperation that was also addressed during the visit of Costa Rica’s First Lady Claudia Dobles in October 2018.

The next two years will be especially significant not only for relations between Korea and Costa Rica, but also regarding Central America at large.

“Costa Rica will have the presidency of [the] Central American Integration System [SICA] for the first half of 2021,” said Bolaños. “We are arranging to invite the president of Korea, not only to meet with leaders of Costa Rica but of all of central America.”

Next year also marks the bicentennial of the independence of Central America and the 30th anniversary of the founding of SICA.

Costa Rica and Korea’s relations will also reach their 60th anniversary in 2022.

“We don’t want to wait until 2022,” said Bolaños, adding that that is why she is here in Korea in person even during the pandemic. “Costa Rica and Korea share many principles and values, we believe in human rights, [preserving the] environment and disarmament. We are hoping to not only enhance the bilateral relationship on the political level, but also to have concrete actions and projects together.”

During her visit through Nov. 27, the vice minister also held meetings with the Korea International Cooperation Agency, Green Climate Fund, Global Green Growth Institute and Ministry of Science and ICT.

Korea and Costa Rica established ties in 1962. Amongst bilateral agreements, the latest include an FTA ratified in both nations last year.