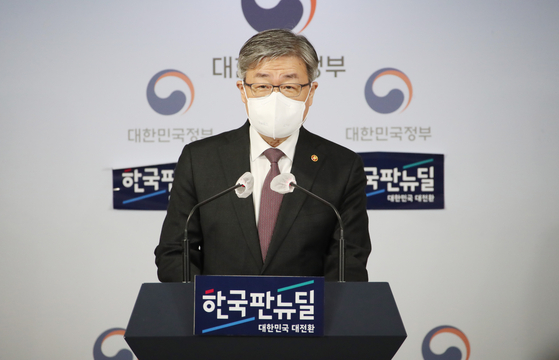 Employment and Labor Minister Lee Jae-kap holds a press briefing at the government complex in Seoul on Monday. [YONHAP]


The 52-hour workweek will be applied to midsize companies without delay on the first day of 2021, Employment and Labor Minister Lee Jae-kap said Monday.

Some have called for a delay to help midsized companies already struggling with the coronavirus pandemic. The government shot that notion down, saying the companies have had enough time to prepare for shorter working hours.

“Korea received a dishonorable evaluation as one of the countries with the longest working hours among Organisation for Economic Cooperation and Development [OECD] member countries,” Minister Lee said in a press briefing Monday. “For the sake of balancing work and life and for health reasons, a 52-hour workweek was adopted in 2018 after long discussions.”

Lee said the government already gave an extra year grace period to companies and factories with less than 300 employees.

“It was supposed to be adopted last January after a year and a half of grace period, but businesses said they needed more time,” Lee said. “In that extended period the government has helped with various policies so that companies could easily prepare for the 52-hour workweek.”

The shorter workweek came into effect for businesses with over 300 employees in July 2018, four months after revised labor laws passed the National Assembly.

Previously, the maximum working hours per week for Korean workers was 68 hours.

The government says its surveys show that companies are prepared.

According to the Labor Ministry on Monday, 81.1 percent of 14,592 companies with employees between 50 and 299 said in a survey conducted between June and August that they are already using a 52-hour workweek. That’s up from the 57.7 percent in the same survey conducted in November 2019.

Additionally, 91.1 percent of companies said they will be able to follow the new shorter workweek, up from 83.3 percent in Nov. 2019.

The Korea Federation of SMEs has argued that the 52-hour workweek should be delayed for manufacturing companies where increases in demand require overtime.

In its own survey conducted between Oct. 16 and Nov. 6, 39 percent of 500 SMEs said that they weren’t prepared to adopt the shorter working hours. Unlike the government’s survey, the federation’s survey was concentrated on manufacturers. They represent 70 percent of the respondents in the federation's survey, compared to 32 percent for the government's survey.

In addressing the concerns of manufacturers, Labor Minister Lee said the government encouraged lawmakers to pass legislation that will allow flexibility in the average working hours.

“In relation to the 52-hour workweek, the most desperately needed legislation is reforming the flexible working system,” Lee said.

“Companies that have huge fluctuations in workloads are eagerly waiting for it,” Lee added. “We ask the National Assembly to pass flexible working system legislation no later than the end of this year.”

The so-called flexible working system allows workers to exceed a 52-hour workweek when there are surges in orders and take breaks when there is less work.