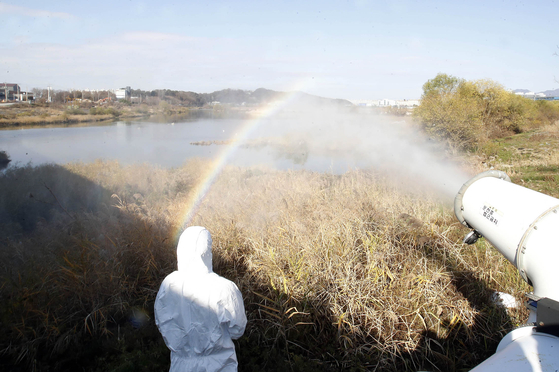 Officials from the Gwangju Buk District Office disinfect a wild bird sanctuary near the city’s Yeongsan River Monday, after the highly pathogenic avian influenza H5N8 virus was detected on a duck farm in the nearby city of Jeongeup in North Jeolla. [YONHAP]

Highly pathogenic avian influenza has been detected on a duck farm in Jeongeup, North Jeolla, generating alarm in a country already grappling with the coronavirus health crisis.

Avian flu viruses normally do not infect people, but a few transmissions to humans have been reported in other countries in the past.

The viruses usually occur among wild aquatic birds and can easily be transmitted to domesticated bird species such as ducks and chickens, sickening or killing them.

Low pathogenic bird flu viruses cause little or no clinical signs in birds, whereas highly pathogenic ones cause severe signs and generally lead to higher mortality rates in birds.

The virus found last week in Jeongeup, about 220 kilometers (137 miles) south of Seoul, was the highly pathogenic avian influenza H5N8 — the same strain that was found from a feces sample collected near Bonggang Stream in Cheonan, South Chungcheong, on Oct. 21. Local officials believe the earlier detection was from a migratory bird.

Officials from the Ministry of Agriculture, Food and Rural Affairs said it appears the virus in the Jeongeup duck farm also came from an infected migratory bird that originated north of Korea, near Siberia. There have been no known reports of the H5N8 virus jumping from birds to humans, the ministry said.

The last time avian influenza was reported on a domestic poultry farm was in March 2018.

The ministry said the virus on the Jeongeup farm was first detected last Thursday. Officials from North Jeolla’s animal hygiene test center were examining ducks that were about to be shipped for sale when they found avian influenza antigens. After further testing, officials determined the farm had been contaminated by the H5N8 bird flu on Saturday.

All other poultry animals in Jeongeup have also been slapped with a seven-day travel ban.

Across the country, the Agriculture Ministry applied a two-day travel ban on all farm animals and vehicles related to the poultry business, which expired Sunday. Jeju Island said Sunday it would entirely ban all poultry products from North Jeolla for the time being.

The ministry last weekend set up a so-called Highly Pathogenic Avian Influenza Central Disaster Management Headquarters to prepare for a possible outbreak, and urged local government offices to create their own headquarters to marshal resources for preventive measures.

The ministry vowed to disinfect all farms and wild bird sanctuaries near the contaminated duck farm in Jeongeup and collect more samples from around the area to check whether any other farms nearby have been struck by the bird flu.