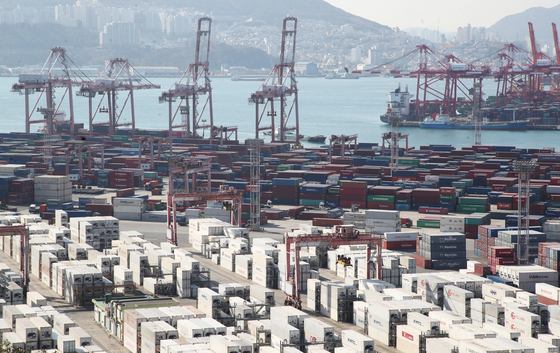 
Korea reported better-than-expected growth in the third quarter largely on the back of recovery in exports and facilities investment.

The Bank of Korea (BOK) said Tuesday that the country’s GDP increased by 2.1 percent during the July-September period compared to the previous quarter, up from a preliminary forecast of 1.9 percent announced in October.


Exports, retail sales and services did better than expected, explained the central bank.

In fact, this was the sharpest growth in more than a decade — since the third quarter of 2009, when the country registered 3 percent growth quarter-on-quarter.


“Facilities investment increased a lot compared to the preliminary figure and construction investment and private consumption was revised upward as well,” Park Sung-bin, an official from the bank's statistics department, told reporters Tuesday.

Investment in facilities increased by 8.1 percent quarter-on-quarter during the July-September period with spending on transportation equipment and machineries expanding.

Exports in the third quarter rose by 16 percent compared to the previous quarter largely thanks to increasing demand for cars and semiconductors.

Real gross national income (GNI) increased by 2.4 percent in the third quarter compared to the second, after recording negative 0.8 and 2.2 percent of growth in the first and second quarters, respectively. That represented a 0.1 percent increase year-on-year. The bank estimated GNI per capital to stay above $31,000.

Previously, the central bank revised upward its GDP growth forecast for the entire year from negative 1.3 percent to negative 1.1 percent.

In order for Korea to live up to that forecast, fourth quarter growth needs to be 0.4 percent to 0.8 percent on a quarterly basis, according to the bank.

In the first and second quarters, Korea reported quarter-on-quarter GDP growth of negative 1.3 percent and negative 3.2 percent with the Covid-19 pandemic taking a toll.

The bank remained uncertain about how much impact the latest rise of Covid-19 infection in Korea will have on the economy.

“As people have already experienced the first and second waves, the impact of the latest one could be limited," Park said. "However since cases are increasing at a rapid speed both in Korea as well as globally, there is concern that the negative impact from Covid-19’s third wave could be considerable,” said Park.