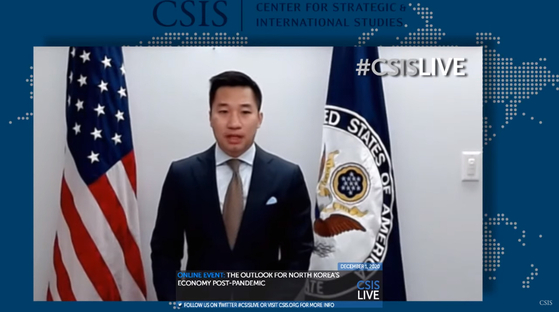 Alex Wong, deputy assistant secretary of state for North Korea, slams China on Tuesday in an address in an online forum hosted by the Washington-based Center for Strategic and International Studies on North Korea's post-pandemic economy. [SCREEN CAPTURE]

Alex Wong, deputy assistant secretary of state for North Korea, accused China of undermining a concerted effort by UN member states to pressure the North into abandoning its nuclear arms by continuing to provide an economic lifeline to the regime.

Beijing is “seeking to undo the UN sanctions regime they themselves voted for” on five separate occasions, and “revive trade links and revenue transfers to the North, thereby ensuring Chinese reach in the North’s economy,” Wong said in an online forum hosted by the Washington-based Center for Strategic and International Studies.

Examples of this were numerous and worrying, he said.

For one, China did not follow through on a 2017 UN Security Council resolution mandating member states repatriate North Korean workers from their territory, by continuing to host at least 20,000 laborers whose salaries are diverted to the North’s munitions industry, Wong said.

The United States has also identified 555 separate occasions over the past year in which ships carrying coal and other sanctioned products from North Korea went to China, he added.

The “most worrisome” among Beijing’s failures to enforce sanctions, Wong continued, was related to its involvement in weapons-related trade with the North.

China continues to host “no less than two dozen” North Korean agents involved in weapons procurement and financial activities on its soil despite being repeatedly urged by Washington to expel them, Wong said.

“There is no excuse for Beijing’s failures,” he continued, saying that the scale and upward trend of unreported trade between the two countries put China in “flagrant violation” of UN obligations.

Wong’s sharp criticism of Pyongyang and Beijing comes during the final throes of an administration that controversially gave North Korea unprecedented recognition in the form of three summits, while failing to secure any lasting commitments from the regime on its denuclearization.

Sanctions remained the main sticking point in the negotiations. The North offered partial steps toward nuclear dismantlement in exchange for partial relief from sanctions, but this was rebuffed by Washington, which wanted irreversible steps from Pyongyang before any economic concessions.

Now with future talks uncertain under an incoming Joe Biden White House, the Trump administration’s parting gift to Pyongyang is a toughened stance on sanctions enforcement.

Wong announced the State Department was launching a new program that offered individuals around the globe up to a $5 million reward for providing information on sanctions violations and illicit activities related to North Korea. 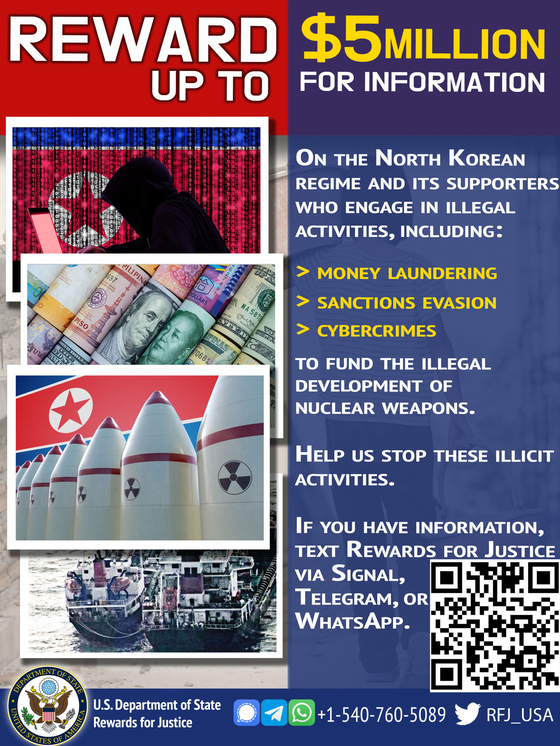 A U.S. State Department poster offering a reward for information on sanctions violations or criminal activities related to North Korea. A website for the program was launched Tuesday. [DPRKrewards.com]


A website created for the purpose, DPRKrewards.com, noted information could pertain to anything from weapons sales and cyber operations to money laundering, drugs or counterfeiting.

China insists it has kept up with full enforcement of UN sanctions, but has also proposed at the United Nations — along with Russia — to alleviate some of the sanctions conditions on Pyongyang to push it toward a settlement with the United States.

Stressing Washington would not stand idle while China poked holes in sanctions enforcement, Wong warned that new sanctions would be imposed on any figures and entities in Chinese jurisdiction engaging in illicit activities with the North.

“We have imposed numerous sanctions designations in the past, and I want to tell you — more are forthcoming.”