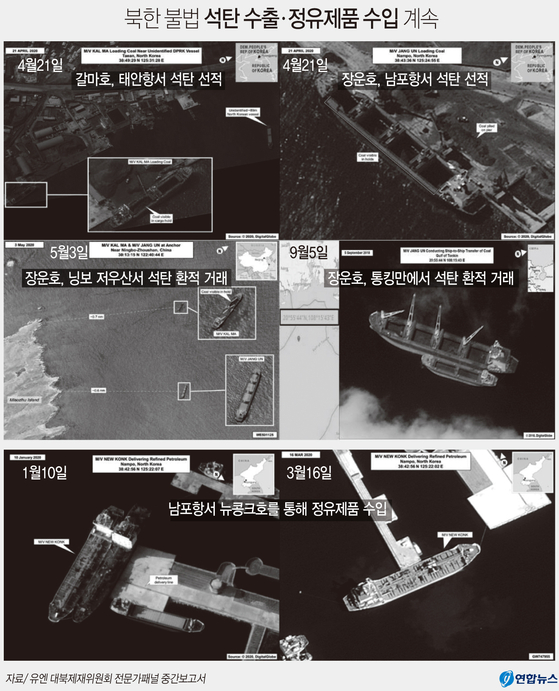 Photographs of Chinese and North Korean ships evading sanctions on coal and other banned shipments to and from the North are featured in an interim UN panel report to the Security Council from September. [YONHAP]

The Office of Foreign Assets Control (OFAC) added six new entities — four of them Chinese — and four Chinese-owned vessels to its growing list of sanctions designations, underscoring the fact that companies in China continue to engage in activities banned by UN Security Council resolutions (Unscr), according to a Treasury press release.


“[North Korea] continues to circumvent the UN prohibition on the exportation of coal, a key revenue generator that helps fund its weapons of mass destruction programs,” said U.S. Treasury Secretary Steven T. Mnuchin in the release.


“The North Korean regime often uses forced labor from prison camps in its mining industries, including coal, exploiting its own people to advance its illicit weapons programs,” he added.


The department further urged Chinese authorities to uphold the resolutions “by taking action against companies, individuals and vessels that engage in Unscr-prohibited trade, including the procurement of North Korean coal.”


The measures follow up on a warning from U.S. Deputy Assistant Secretary of State for North Korea Alex Wong in an online forum last week that new sanctions toward entities under Chinese jurisdiction were forthcoming amid continued suspicions of illegal trade between Beijing and Pyongyang.


Condemning China for “seeking to undo the UN sanctions regime they themselves voted for” on multiple occasions, Wong accused the Chinese of attempting to “revive trade links and revenue transfers to the North, thereby ensuring Chinese reach in the North’s economy.”


As part of a renewed effort to crank up enforcement of sanctions, the U.S. State Department last week also announced it was offering up to $5 million for information on sanctions violations related to North Korea.


China is the North’s largest trade partner by an immense margin, yet Pyongyang’s economic dependence on Beijing may be even greater if accounting for unofficial and black-market transactions between the two countries, experts say.


And it is through these informal channels through which North Korea is believed to circumvent international sanctions that have throttled its economy with bans on mineral and coal exports as well as imports of much needed fuel.


Though official trade has taken an immense hit due to Pyongyang’s border restrictions aimed at stopping Covid-19, North Korean and Chinese ships carrying coal and other prohibited goods have been identified in Chinese ports on hundreds of separate occasions, according to Wong.


Beijing’s Foreign Ministry on Wednesday slammed the United States for imposing sanctions against its companies and individuals, noting it would take measures to protect its citizens' and companies’ rights and interests.