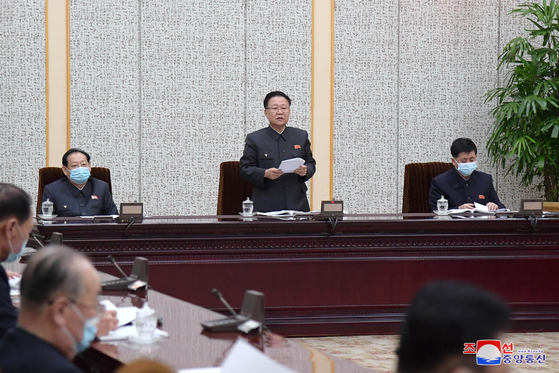 Choe Ryong-hae, president of North Korea's Supreme People's Assembly Presidium, center, presides over a plenary meeting of the rubber stamp legislature in Pyongyang on Friday, as shown in a photograph released by state media. [YONHAP]

According to the official Korean Central News Agency (KCNA), the Presidium of the Supreme People’s Assembly (SPA) convened under its president, Choe Ryong-hae, to pass four laws unanimously.

Particularly notable was a law “on rejecting reactionary ideology and culture,” which the KCNA reported would be “certainly observed by all the institutions, enterprises, organizations and citizens” in the country.

The principles enshrined in the law were aimed at “further cementing our ideological, revolutionary and class positions by thoroughly preventing the inroads and spread of the antisocialist ideology and culture and firmly maintaining our idea, spirit and culture,” the report said.

The term “reactionary” has been loosely employed in North Korea to define a variety of condemned behaviors, including engaging in capitalist practices.

While it is not exactly known what events triggered an already draconian regime to take such actions, the new law may be related to corruption or the popularity of foreign cultural influences spurred on by the growth of the private economy.

In mid-November, North Korean leader Kim Jong-un presided over a party Political Bureau meeting that condemned “non-socialist” practices rampant in the regime and called for a campaign to root out such ideas.

The KCNA report at the time said such practices were manifest in a “serious crime” perpetrated by officials at the Pyongyang University of Medicine who were later punished.

According to a source in the regime quoted by U.S. government-funded outlet Radio Free Asia, university officials had allegedly admitted students based on their family backgrounds or after receiving bribes.

The problem became pronounced recently after graduates admitted through such methods caused several medical accidents due to their alleged incompetence.

Experts in South Korea noted the new law appears to be aimed at pre-empting internal agitation generated by economic difficulties owing to Covid-19 and international sanctions.

“As the economic situation worsens, it becomes increasingly more difficult to uphold the legitimacy and sustainability of socialism,” said Lim Eul-chul, a professor of North Korean studies at the Institute for Far East Studies at Kyungnam University.

“[The regime’s actions] are geared toward preventing public disturbances through strong legislation and ideological campaigns.”

It was the second time in around a month the SPA Presidium met to pass new laws, after it approved strengthening rules against smoking at a meeting on Nov. 4.

The increased frequency of such high-level meetings as well as the legislation they produce testify to the anxiety felt by the regime as it readies itself to hold a rare party congress in January, in which a new economic plan is expected to be announced to make up for past failures.

The Presidium on Friday decided on convening an SPA session in late January next year, the KCNA said, which would make it a back-to-back event with the party congress. SPA sessions, usually held in April, are key venues for the regime to announce important policy changes, and are also occasions for the country to formalize its budget for the year.