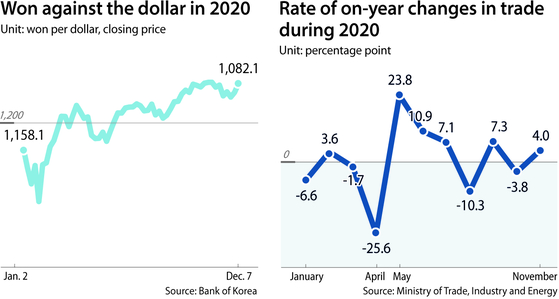 The depreciation of the U.S. dollar is raising red flags at companies that export.

The U.S. dollar index, which measures the value of the greenback against a basket of foreign currencies, tumbled to 90.76 as of Dec. 7, dropping by 5.98 percent compared to the first week of November. The fall was attributed to rising expectations for vaccine development and additional fiscal stimulus in the United States.

The Institute for International Trade, a research institute under the Korea International Trade Association (KITA), released an analysis of 967 export companies in Korea on Sunday. The analysis showed that the biggest obstacle for the companies was the increase in volatility of exchange rates and the value of the Korean currency.

Small- and medium-sized enterprises (SMEs) were especially troubled. The Korea Federation of SMEs (KBIZ) in November surveyed 308 SMEs about the effects of the strengthening of the Korean won. Some 62.3 percent of the businesses experienced a drop in profitability due to the appreciation of the won.

For many SMEs, according to the survey conducted by KBIZ, the breakeven exchange rate is 1,118 won to the dollar. When the won exceeds that rate, many will lose money on all their exports. On Dec. 7, the won closed at 1,082.1 won against the dollar. Compared with the beginning of September, the won rose by around 100 won during the three-month period.

“We are in desperate need of a wide array of support measures to expand exports and prevent the profitability of export-based SMEs from deteriorating,” said Kim Tae-hwan, head of the international team at KBIZ.

“Although we are currently able to make ends meet, we need response measures from industry associations in case of a prolonged depreciation of the dollar against the won,” said a spokesperson for a local metal supplier.

“Just when we were about to make up for the stagnation in performance with an upswing in exports, we encountered this unfavorable factor,” said a spokesperson for a machine manufacturer. “We are planning to increase the unit price of transactions or increase the quantity of orders by negotiating with the clients.”

The spokesperson said the company will have to find ways to cut costs if this situation continues, such as asking subcontractors to lower prices.

Seven out of 10 local companies reportedly have not confirmed management plans for next year, according to a Federation of Korean Industries (FKI) survey of top-ranking companies released on Sunday, showing the depth of uncertainty on the business scene.

Among the 151 surveyed companies, 71.5 percent responded that they have either created a draft of next year’s management plan or have not even done that. None of the nine surveyed steel companies had finalized plans for next year. More than three-fourths of automobile parts companies said they had not finalized management plans.

Three out of four Korean companies, or 74.8 percent, projected recovery may come in the second half of next year.

“Internal and external uncertainties like the resurgence of the coronavirus provide challenges in forecasting the management environment,” said Yoo Hwan-ik, head of corporate policy at FKI. “There need to be measures in place so that the companies’ growth momentum does not weaken.”

Another day, another low