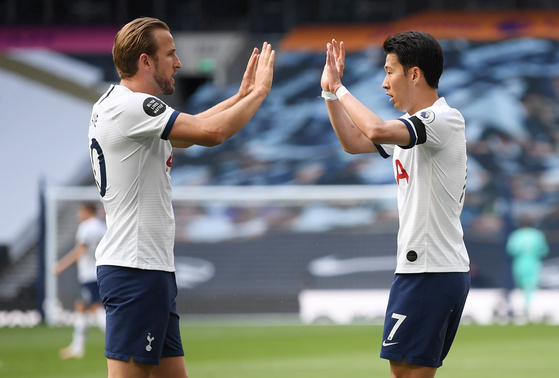 Son Heung-min of Tottenham Hotspur, right, celebrates with his teammates Harry Kane after scoring the opener during a Premier League match against Arsenal at Tottenham Hotspur Stadium on Sunday. [REUTERS/YONHAP]


Son Heung-min of Tottenham Hotspur has done it again.

During Spurs’ Premier League derby against Arsenal at Tottenham Hotspur Stadium on Sunday, Son started things off by scoring the opener 13 minutes into the match.

Once again assisted by teammate Harry Kane, Son dribbled the ball about 30 yards from outside of the box before slotting the ball into the back of the net. This was Son’s 10th league goal of the season. With a 10th goal, Son has already managed to score double-digit league goals for five consecutive seasons.

His stats this season make it more impressive as he scored his 10th league goal only in Spurs’ 11th league match of the season. Those 10 goals are good enough to tie the league scoring record for the entire Arsenal team. Across all tournaments, this was Son's 13th goal of the season.

And Spurs weren't finished yet. The Son-Kane duo once again worked their magic a minute into injury time in the first half of the match to double their lead to 2-0.

As Arsenal struggled to score a single goal in the second half of the match, Spurs picked up another win to take the lead in the Premier League regular season standing.

“I can’t be humble today,” Son said to Spurs TV after the match. “What should I say? If I say ‘it was a lucky goal,” then people will say [no]. [But] I think it was a lucky goal. It was beautiful, and this was our first chance to score like this, and it was really, really good.”

With another goal, Son is now one step closer to Premier League scoring leader Dominic Calvert-Lewin, who tops the league with 11 goals as of the most recent update. Son is ranked second with 10.

Following the match, Son also expressed his satisfaction with the team’s victory.

“I’m more happy to get three points, not score goal like this,” Son told Spurs TV. “We win the games and the team’s performance was phenomenal. Obviously, Arsenal was pushing hard and they want[ed] to score. We knew chances [were] going to come. We had to be clinical.”

Spurs’ head coach Jose Mourinho also expressed his satisfaction with the victory, as well as the team’s performance.

“My son was just behind,” Mourinho said to Spurs TV. “I turned and I looked to him and his face was like ‘oh’ and my face was probably the same.”

Along with the victory in the derby, Sunday's game also saw the return of a few fans return. Tottenham Hotspur Stadium had about 2,000 fans allowed into the stadium, but as it was the first time in a long time that he got to hear the fans’ cheer, Son said that it felt like the stadium had a sellout crowd.

“Especially the fans were back and playing against Arsenal in derby,” Son said to Spurs TV. “It was great timing to score ahead. It was incredible. We missed [the fans] a lot. I hope the fans are missing us as well. Also, [there were] only 2,000, but it sounds like more than 20,000. Like I said, fans deserve more than three points today.”

As well as the fans' return to the stadium, Son’s wonder goal and a three-point win to top the league, there was another record set on Sunday. When Kane scored the second goal of the match, he became the all-time record scorer in the north London derby, a historic achievement as the history of the derby goes back a century.

It was a day to celebrate for Spurs because Mourinho also hit a new record, becoming only the second Spurs coach ever to win two straight matches against Arsenal.

Although Sunday was a day to celebrate, Spurs can’t lose focus as they are still in the middle of the season. On Thursday, Spurs will play their Europa League Group match against Antwerp at Tottenham Hotspur Stadium. They have to win the match to finish first in Group J. The match will kick off at 5 a.m., Korea time, on Friday this week.

Following that, Spurs will play a Premier League match against the 11th ranked Crystal Palace at Selhurst Park Stadium on Sunday, Dec. 13. This match will be played at 11:15 p.m., Korea time, on Sunday night.