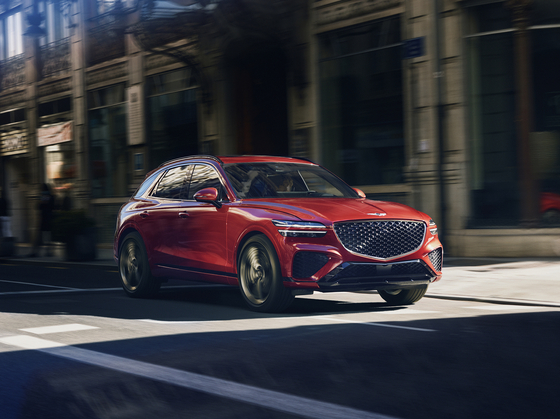 
Genesis premiered the brand's second SUV, the GV70, on Tuesday, as it vies to cement its position in the luxury SUV segment after the successful introduction of the GV80 earlier this year.

While inheriting the brand's high-end vibe, the GV70 will be the most dynamically designed model out of the five Genesis vehicles launched so far, according to the brand.

"It doesn't have any gender-specific or age-specific target customers," said Lee In-a, head of the brand's global customer experience office, at an online press conference Tuesday. 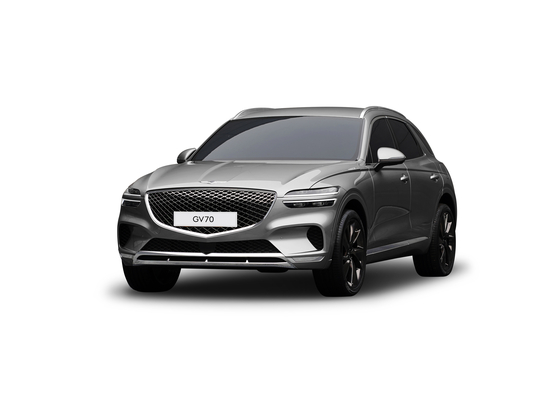 
"Although it has dynamic looks, it doesn't specifically target younger demographics but aims to cater to those who are not afraid to try new things."

The GV70 may be smaller in size compared to the GV80 which launched earlier this year, but in terms of technology, it exceeds its predecessor.

The rear occupant alert, which notifies the driver in case any passenger is left behind in the rear seat, has been upgraded by replacing the existing ultrasonic waves system with a radar sensor.

The carmaker says the upgraded alert system is now able to sense even the smallest movement detected in the back seat, like chest movements from a baby's breathing.

The exterior inherited key design features of the Genesis brand, such as the quad lamp, the dual horizontally stacked headlamps, and large-size crest grille, but also made changes to give a more sporty feel.

The headlamps, which were originally located a little lower than the grille, are now positioned on the same level as the grille, which, according to Genesis, is to emphasize a more confident and spacious front.

The sideline resembles more of a coupe with a sloping roofline. The slimmer rear lamps also emphasize the futuristic and sporty characteristics of the car, Genesis says.

Genesis is expected to start receiving purchase orders within this year to roll out early next year.

The GV70 clearly has a competitive edge in price over its European rivals in Korea such as the BMS X3 and Mercedes-Benz GLC among others, as their prices start in the 60-million-won range.

Lee from Genesis said the new model will launch in the United States and China as they are important markets, especially in terms of luxury models, but didn't confirm the exact date.

The GV80, Genesis' first SUV model, has been successful so far.

The model, which launched in Korea in January, sold 27,000 units as of October while its sales target was originally set at 24,000 units.

It launched in the United States last month and has sold 58 units.