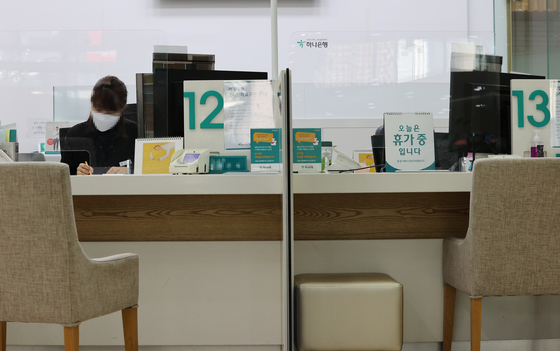 A loan counter at a bank in Seoul sits empty on Nov.30 as government’s stricter guidelines on unsecured loans took effect from that day. [YONHAP]


Bank lending to households hit a record last month on a rush ahead of tighter unsecured loan restrictions and as money was secured by those fearing more pandemic-related uncertainty.

Household debt to banks increased by 13.6 trillion won ($12.5 billion) in November to 982.1 trillion won, according to data from the Bank of Korea on Wednesday. It is the largest monthly increase in household lending since the central bank began compiling the data in 2004.

The central bank said one of the main drivers was the government’s restrictions on unsecured loans that took effect at the end of last month.

“People tried to secure money before the new guideline took effect,” said Yoon Ok-ja, an economist at the financial market affairs team from the bank.

The government will recall the money if it is used to purchase a property in an area designated by the government as overheated within a year after lending, as the main reason for the tighter regulation is to settle property markets.

“The borrowed money [last month] was used largely to buy houses,” Yoon added. “Many households these days use unsecured loans on top of mortgage loans to purchase houses.”

Despite government’s efforts to cool the property market, the number of transactions to buy apartments has jumped back after a decline in August. According to data from the Ministry of Land, Infrastructure and Transport, transactions for apartments nationwide increased from 50,000 in August and 51,000 in September to 68,000 in October.

The coronavirus pandemic also pushed households to take loans, according to the bank, as the virus has devastated many areas of business throughout the year.

Some households took out the money to buy stock in initial public offerings.

“In October there was a public offering of Big Hit Entertainment, and in November there were some other companies that went public,” Yoon said.

The central bank expects household debt growth to slow next month as tighter guidelines are already in place and companies usually give out year-end bonuses, which relieve the economic burden of households.

The Financial Supervisory Service said that it will continue to monitor household debt by keeping an eye on loan programs offered by banks and developing ways to measure capacity to service debt.