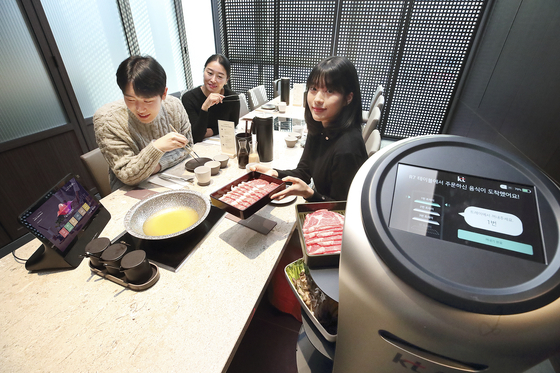 According to KT Wednesday, the new serving robot will be stationed at Modern Shabu House in Gwanghwamun, central Seoul, a restaurant that serves shabu-shabu.

It measures 1.3 meters (4 feet, 3 inches) in height, 56 centimeters (22 inches) in width, and contains three trays that can be completely detached from the robot’s body. It can carry up to 30 kilograms (66 pounds).

The company launched its first artificial intelligence (AI) serving robot at a branch of the franchise Mad for Garlic in September. This second-generation robot will have to be able to handle far more work, as shabu-shabu restaurants see a lot of repeat orders for refills of vegetables, meat and gravy.

Without the robot, customers looking for more food would have to wait in line at the refill station, a situation the restaurant wants to avoid amid the ongoing coronavirus pandemic.

Each table will have a KT GiGA Genie speaker that can understand verbal orders, including requests for food, refills, dishes and water. The robot will then make the delivery.

“We believe introducing a robot will greatly save energy for the restaurant staff,” KT said in a statement. “Before, staff had to make at least two visits to the customer’s table to check requests and deliver orders.”

KT’s second-generation AI serving robot newly employed at the shabu-shabu restaurant has been upgraded from lessons at Mad for Garlic.

The hardware was developed by Hyundai Robotics, in which KT has acquired pre-initial public offering stock. The mobile carrier was in charge of the software, which includes 3-D mapping and self-driving technology.

The upgraded software makes it possible for the robot to move with higher precision, like navigating the narrow gap between tables, and the robot can now automatically return to the charging station when the power runs low. The trays are also now detachable to make it easier for customers to remove food.

Apart from the robot, KT and Sun at Food, the shabu-shabu restaurant chain’s operator, launched a “Genie Room” inside the Gwanghwamun store. This room will coin voice-recognition gadgets made by GoQual, a Korean company specializing in smart home technology, with which customers can control the lighting and room temperature verbally.