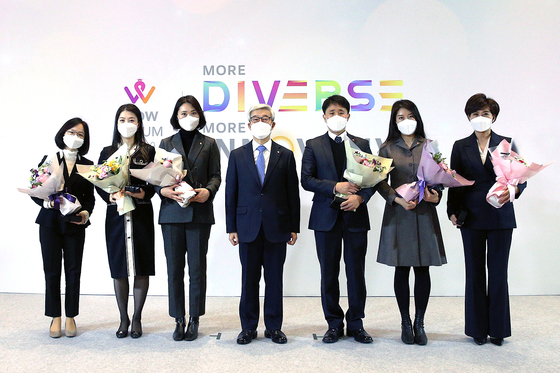 This year’s WOW (Way of Woman) Forum was held online for other participants besides the recognized employees. A team leader at Lotte Chilsung Beverage, who was one of the first female members of Lotte’s beverage business, and five others, from Lotte Data Communication, Lotte Chemical, Lotte Hotel & Resorts and Lotte GRS, were recognized during the forum.

This year, a diversity category was introduced to recognize employees regardless of gender and role at the company. A male team head and a female employee of Lotte GRS were acknowledged for introducing the Vietnamese banh mi sandwich to its coffee brand.

The forum was held for the first time in 2012 to reward female leaders whose performance stood out during each year. Lotte Chairman Shin Dong-bin created the forum for the company’s female empowerment initiative.

Song added that he will strive to create a corporate culture that embraces diversity.