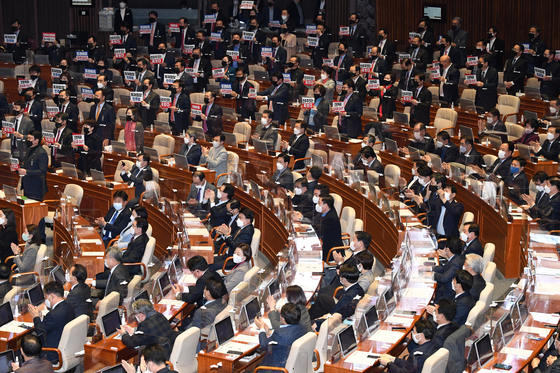 Ruling Democratic Party lawmakers cheer while the People Power Party members shout out their protests as the National Assembly passes a controversial bill Thursday revising the Corruption Investigation Office for High-ranking Officials (CIO) law to remove the veto power of the main opposition party in the process of selecting the CIO chief. [YONHAP]

The National Assembly passed a controversial bill Thursday about a powerful new corruption investigation agency, which was strongly protested by the main opposition party.

The bill revising the Corruption Investigation Office for High-ranking Officials (CIO) Act was passed in a plenary session in a vote of 187 to 99, with one abstention.

The revision neutralizes the veto power held by two seats for the People Power Party (PPP) and its conservative allies on a seven-member committee to select candidates for the first head of the CIO.

Setting up the CIO was a campaign promise by President Moon Jae-in and a key part of his prosecutorial reforms. At the end of last year, the ruling Democratic Party (DP) and its allies pushed through a series of bills to create the CIO, making it the first state organization permitted to take over some powers of the prosecution. Conservative opposition lawmakers view it as an attempt to overly rein in the state prosecution.

The CIO act, approved last December, took effect on July 15, but its launch was delayed as the PPP used its veto power to reject the DP’s picks for the agency’s first chief, who will serve a three-year term. The DP decided last month to use its majority and change the law.

According to the CIO law, a special committee of seven members tasked with vetting and nominating candidates to lead the agency offers two finalists to the president to choose from. The justice minister, National Court Administration minister and the president of the Korean Bar Association are automatically included on the committee. The ruling party is supposed to name two members and the main opposition party is supposed to name the final two. Six out of seven committee members had to agree to nominate a candidate for leader, attempting to ensure a nonpartisan and independent figure leads the agency.

The revision passed Thursday cuts the endorsement for the final two candidates for CIO chief from six members of the committee to five, or a two-thirds approval.

The bill was introduced in a plenary meeting on the final day of the National Assembly's regular session Wednesday, but voting was blocked that day by a filibuster by the PPP.

DP lawmakers, who hold a super-majority of 174 seats in the 300-member Assembly, cheered as National Assembly Speaker Park Byeong-seug pronounced the passage of the bill with a bang of his gavel Thursday afternoon. PPP representatives jeered and called Moon “authoritarian.” Some chanted out protests and held up signs that read “Democracy is dead.”

Moon immediately welcomed the passage of the bill and said it is "fortunate that the way has been opened for the speedy launch of the CIO,” according to Blue House spokesman Kang Min-seok.

The president stressed that the CIO is part of his promise to the public of thorough investigations of corruption among people in power, Kang added.

Moon said he expects the CIO will be formally set up at the beginning of next year.